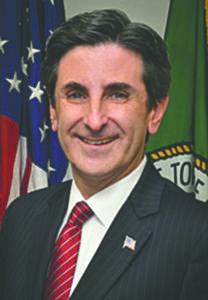 In the aftermath of Town of North Hempstead Supervisor Judi Bosworth announcing she would not be running for reelection, Town Clerk Wayne Wink threw his hat in the ring for the position. A career politician, Wink has been Town Clerk for the last eight years, previously a town councilmember for five years and Nassau County Legislator for the 11th District.

“I think it’s the next opportunity for me to serve the community and to bring a similar, but slightly new perspective to town government,” Wink said. “I think Judi has done some tremendous work and I think that town government in North Hempstead is in good shape.

The ability to help expand our economy, the ability to revitalize our downtowns in the aftermath of the pandemic, I think is something that I am uniquely suited for.”
Wink, 54, was born in Brooklyn and raised in Uniondale before going to Hofstra University for his undergraduate studies. A couple years after graduating, Wink headed to St. John’s University to pursue a law degree and has worked at several law firms. Since his departure from the Nassau County Legislature, he has not practiced law.

The last eight years for Wink as town clerk has given him insight on the town’s functions and every day workings. For all the responsibilities of the town clerk, it is not a voting member of the town’s board. The position of supervisor would give him the wheel rather than being the engine that runs it.

“I see it as a step up in terms of being able to have more influence on the agenda, the town, being able to implement more of my vision for the future of the town,” Wink said. “You can focus on what a town clerk does, but the town supervisor is a more expansive position. I think given my experience that that’s the right place for me to be at this time.”

If he wins the election, Wink will be coming into office at a time where COVID-19 has decimated the downtowns of North Hempstead.

“We’ve been working as best we can through the pandemic on measures to allow for greater access to outdoor seating, opportunities to be able to bring customers in particularly our restaurants and our food venues, even our retail venues,” Wink said.

With the state looking to increase revenue, there is the potential that marijuana becomes legal, the town has already banned the substance on its own.

Most research suggest that United States, and especially Long Island, needs more affordable housing. While efforts have been made, the town is still looking at providing areas for its residents to afford.

“I definitely think we need to look into workforce housing and transit oriented development as ways to provide opportunities for young people to move in and then eventually move up,” Wink said. “That’s how you keep a town vibrant. That’s how you keep our local economy vibrant.”

Wink will also look at how the town can become more environmentally friendly, something he believes need to be taken more seriously.

“Like all levels of government and quite frankly, like all businesses, we need to do everything we can to reduce our carbon footprint, to make ourselves environmentally beneficial or at least neutral and the town has been doing that over the years, but I think we really need to commit to it,” Wink said.

Making the community a better place to live is something Wink expressed a desire for. Handling a ongoing crisis and revitalizing the area in the aftermath would be his first problem to handle, if elected.

“I want North Hempstead to be the best possible quality of life for anyone in the general area, as well as being a vibrant and active downtown, in each community so that people cannot only live in town, and commute from the town, but also at the same time, be able to shop and dine and recreate within the town.” Wink said. “If we can do all that with a minimum of car traffic, then I think we’ve really solved the problem.”