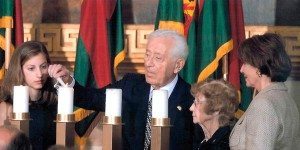 William Ungar, the 17th president of Temple Israel of Great Neck and a Holocaust survivor who became a force in American business, a major philanthropist and Jewish leader, died last Friday, Sept. 20, just short of his 101st birthday.

His larger-than-life story was full of countless twists and turns of life and frequent unexplainable adventures so bold they could easily be the plot of a grand romance-adventure novel. But anyone reading it would more likely think the story too packed with melodrama to be believable.

The life of Mr. Ungar and his late wife, Jerry, was very much touched and shaped both by the Holocaust and the founding of the State of Israel.

Mr. Ungar was a teacher in a technical high school before initial Nazi aggression made him a fighter for the Polish army. When he was severely wounded, he was hospitalized in his native Poland. Surrounded by heavy fighting, the hospital was eventually conquered by advancing German troops. Because of his wounds, he was allowed to return home. But when his community fell to the Nazis, he found himself behind enemy lines once again.

During the 1941 to 42 school year he was allowed to teach Aryans to prepare them for work to further the German war effort. As the war intensified, a Polish Catholic student gave him his Aryan documents, enabling him to live a life of relative normalcy a while longer. But when someone denounced him as a Jew, he was arrested by the Gestapo and sent to a concentration camp. After a short period of imprisonment, he became one of the few people to ever escape a death camp. He returned to his former home, and during his period of his hiding in a abasement crawl space, the entire building was occupied by the Gestapo to house their members. The advancing Red Army liberated the area in June 1944. After living for a year under Soviet rule while the war was still going on, he decided to head to the United States. Other than himself, no one in his 80-member family survived, including his wife and young child.

Landing on the shores of New York City from the first boat of war victims to make it to the U.S., he was greeted by relief workers. Among them was his older brother, whom he met for the first time, and other members of his family, who were living in the United States.

He attended the engineering school of City College of New York at night while working for an envelope machine manufacturing company during the day. Ultimately, he was able to obtain several envelope-making machines for himself. Out of those humble beginnings on Mott Street in lower New York grew the New York Envelope Company and National Envelope Company, later to become the largest privately held envelope manufacturer in the United States.

The rags-to-riches story of Mr. and Mrs. Ungar has been one of the subjects of William B. Helmreich’s noted book, Against All Odds. Mr. Ungar was the author of two books, Only in America: From Holocaust to National Industry Leadership and Destined to Live.

Mr. Ungar served on the Board of United Synagogue of Conservative Judaism and become an officer of the Synagogue Council of America. He and his wife were major benefactors of the U.S. Holocaust Memorial Museum in Washington, D.C.; Yad Layeled, a museum in Israel established to memorialize children who perished in the Holocaust; and Temple Israel’s Waxman High School and Youth House.

In 2005 Mr. Ungar had the distinction of being selected to light a memorial candle in the Capitol Rotunda in Washington, D.C., as part of the official United States government observance in memory of the six million Jewish victims who perished under Nazi tyranny.

That same year, he was awarded the honorary degree of Doctor of Humane Letters at Queens College.

Mr. Ungar said at the time, “When I look back at my life, it seems as if it has had a lot of meaning. It has given me the opportunity to be alive to serve the Jewish people, to learn not to hate, and to recognize the worth of every human being.”