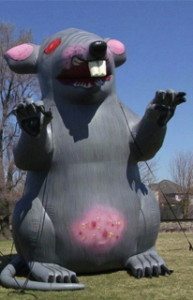 You may have noticed a large inflatable rat in front of the library’s main branch at 159 Bayville Ave., which is under construction.

According to Kathy Giotsas, executive director of the library, something’s going on between the subcontractor and union. Apparently, the dispute involves the union, but it doesn’t have to do with wages and the work is continuing.

The rat and representatives have been there for for part of the past two days. Giotsas said, “They’re looking to resolve the whole situation between the subcontractor and the union.”