By Mike Adams and Caroline Ryan

The Water Authority of Great Neck North is exploring following its regional counterparts in filing a lawsuit against companies alleged to have knowingly contaminated the local water supply with harmful chemicals, an attorney representing the district in a similar case said. 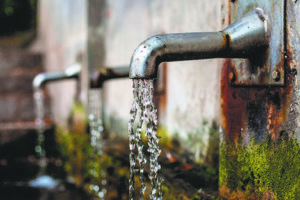 Roslyn Water District, the Village of Mineola and water districts in Port Washington and Carle Place recently filed lawsuits against against 3M Company, Dyneon LLC, E.I. DuPont de Nemours and Company and The Chemours Company. According to the lawsuits, which were filed separately but are being heard by the same judge to expedite legal proceedings, aquifers in the region have been contaminated with perfluorooctanoic acid (PFOA) and perfluorooctane sulfonate (PFOS).

“The idea is that the public shouldn’t have to bear the cost of removing chemicals they didn’t put in the water.” —KAtie Jones

PFOA and PFOS, sometimes collectively referred to as PFAS, are chemicals typically used to make carpets, clothing and fabrics for furniture that have been in use for decades. The lawsuits allege the defendants knew or should have known how dangerous these chemicals are when introduced into the water supply, and should bear the financial burden of removing them.

“The idea is that the public shouldn’t have to bear the cost of removing chemicals they didn’t put in the water,” Katie Jones, an attorney at Sher Edling LLP, a California-based law firm representing all the plaintiffs, said. “The responsibility falls on the company that manufactured the chemicals, marketed and promoted their use all while knowing about its risks to human health and about how long it stays in the environment.”

A 2016 study conducted by the EPA established a link between exposure to PFOA and PFOS and adverse health effects, including cholesterol changes, kidney or testicular cancer, increased liver enzymes and developmental effects to a fetus during pregnancy or for breastfed infants, such as low birth weight, accelerated puberty and skeletal variations.
A representative from 3M, would not comment on the current lawsuit, but stated that “3M acted responsibly in connection with products containing PFAS and will vigorously defend its record of environmental stewardship.”

The Water Authority of Great Neck North is one of 23 districts on Long Island using Jones and her colleagues at Sher Edling as attorneys to sue the Dow Chemical Company, Ferro Corporation and Vulcan Materials Company over similar claims that the companies knowingly polluted the water supply with a harmful chemical, in this case 1,4-dioxane.

Similar to the PFOA/PFOS suits, the districts suing over 1,4-dioxane contamination are seeking damages to place the burden of cleaning the contaminated water sources on the manufacturers they claim contaminated them in the first place.

Jones said the Water Authority of Great Neck is likely to file a suit against 3M and the other manufacturers over PFAS contamination as well.

The current method for removing 1,4-dioxane from a water supply involves the use of an Advanced Oxidation Process (AOP). Setting up an AOP system for a contaminated community source is expensive, however. Installation alone can range between $1 and $5 million per contaminated well, according to multiple estimates, and varies depending on the size of the well and the extent of contamination, with additional maintenance costs incurred over years of upkeep.

Arjun Venkatesan, a research scientist for the New York State Center for Clean Water Technology and a professor in Stony Brook University’s Department of Civil Engineering, specializes in treating emerging contaminants in drinking water supplies. Venkatesan said the AOP doesn’t work with PFAS due to the toughness of the compounds, but PFOA and PFOS can be treated by more accessible measures.

“The good thing is the granular-activated carbon filters that are currently in place, and even the Brita filters, are capable of removing these compounds from water,” Venkatesan said. “The carbon filtration system does a pretty good job of removing PFOS and PFOA, but there are several questions associated with it. PFAS are actually a group of chemicals, there are more than a thousand formulations, including some several unknown species that we cannot even detect now. So we don’t know if the filtration works great for all these compounds.”

Venkatesan mentioned filtering these contaminants out of a water supply is a time-consuming process, and also cautioned residents in affected areas against acting rashly before contacting their water providers.

“It takes time for each water district to get approval for cleaning up their systems and installing these advanced oxidation processes,” Venkatesan said. “It’s not going to happen overnight. Not every single well is contaminated with 1,4-dioxane and PFOA/PFOS. So the public should talk to their specific water districts to understand what the contamination levels are that they’re getting in their tap water before boycotting tap water.”