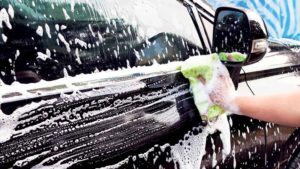 Erin Lipinsky, a Special Olympics athlete who raised the most money as an individual for last year’s annual Polar Plunge, is at it again with a community car wash to benefit the New York State Special Olympics. 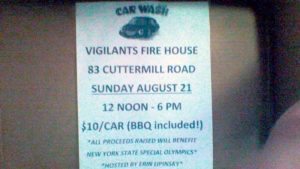 Lipinsky is a member of the Great Neck Spirits basketball team during the school year, and decided last year to participate in the Town of North Hempstead’s Polar Plunge to benefit the New York State Special Olympics. His dedication to fundraising earned him recognition at the event, as well as an invitation to town hall by Supervisor Judi Bosworth, who honored him for his efforts to raise money. He was joined by more than a half-dozen members of the Great Neck Alert Fire Company, where he has served as a volunteer for more than a decade.

Lipinsky said that he’s been raising money for Special Olympics for many years, and he was able to collect funds this year with the help of donations from many stores in the Great Neck and Port Washington areas. Last year’s Polar Plunge raised a total of $61,500 that went to help support more than 200 Special Olympics athletes for a full year.

While next year’s Polar Plunge is just being organized, Lipinsky cannot stop thinking of ways to help. He has organized a community car wash, sponsored by the Great Neck Vigilant Fire Department, on Sunday, Aug. 21, from 12 until 6 p.m. at the Vigilant Fire House, 83 Cuttermill Rd. in Great Neck. The donation for a car wash is $10 per car and a barbecue is included. All proceeds will benefit the New York State Special Olympics.

Lipinsky has been putting up flyers all over town and hopes that the community will come out to support this event.