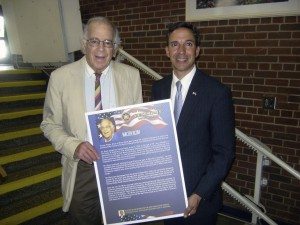 New York State Senator Jack M. Martins (R-Mineola) just inducted D-Day Army veteran Walter Blum of Great Neck into the New York State Senate’s Veterans’ Hall of Fame. Blum was named to the Senate’s Veterans’ Hall of Fame by Senator Martins.
“Like so many of ‘the greatest generation,’ Walter Blum fought for our country and liberated millions from tyranny and oppression. His heroism on the battlefield and his service to his community make him truly deserving of this honor. It is my pleasure to induct him into the New York State Senate’s Veterans’ Hall of Fame,” said Martins.
Private Walter Blum of Great Neck was among the bravest Americans to storm the beaches of Normandy in the fight to liberate millions of people from the evils of tyranny.
Blum joined the U.S. Army in 1943 at the age of 18. As a member of the Corps of Engineers’ First Amphibious Engineers Brigade, he was among the first Americans to land at Utah beach on D-Day. Under fierce enemy fire which killed half the men in his brigade, he cleared enemy mines from the path of American landing boats, layed down steel mats to give Allied tanks a clear path to the beach, and built field hospitals for wounded American soldiers.
Blum continued fighting through France as part of Operation Overlord. He was wounded twice, nearly losing his leg after being hit with mortar shrapnel. After several months of hospitalization, he returned to active service in Italy building care facilities for Russian soldiers who were recently freed from imprisonment in Nazi slave labor camps.
He was discharged from the Army in September, 1945 and earned the following awards for his brave and distinguished service: the Purple Heart with an Oak Leaf Cluster; Bronze Star; European, African, Middle Eastern Campaign Medal; World War II Victory Medal; Good Conduct Medal; and New York State Conspicuous Service Cross.
After the war, Blum returned home and continued serving others as a member of numerous community organizations, including the Great Neck Lions Club; Great Neck Veterans Social Club; Brook Hill Civic Association; Town of North Hempstead Planning Board; Knickerbocker Yacht Club; the North Shore Animal League; and the American Institute of Architects. Blum also speaks to both students and adults about his experiences on D-Day to ensure that the sacrifices made by our World War II veterans will always be remembered.
The Senate’s Veterans’ Hall of Fame recognizes veterans from across the state for their extraordinary efforts in combat or for work performed after they were discharged from the service. Blum’s biography and photo were displayed in the Legislative Office Building in Albany as part of a display honoring the 2014 inductees into the Senate’s Veterans’ Hall of Fame.