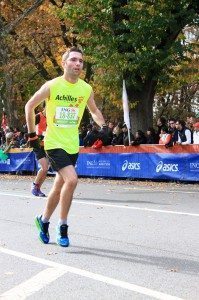 Alex Schneider of Great Neck will participate in the Runners World Cover Contest. The participant with the most votes will be featured on the front cover of the December edition of Runners World.
The twenty-four year old with autism has competed in more than 120 races including two Boston Marathons, two Hamptons Marathons, one Marine Corp Marathon, and the ING New York City Marathon. Alex ran his personal best of 3:14:36 in the 2013 NYC Marathon.
At 15-years-old, Alex along with his twin brother Jamie fell in love with running and haven’t stopped.
Alex is the faster of the brothers. He runs a 5:25 minute mile and consistently finishes in the top tier of his running group. No one is quite sure how fast Alex can truly run. His trainers strain to keep up with Alex’s seemingly endless endurance.
His family hopes that his accomplishments will provide the inspiration for others to celebrate their challenges – and to prove to them that their triumphs can be far greater than their disabilities.
The deadline to vote is Friday, Aug. 15. To vote for Alex Schneider, visit http://covercontest.runnersworld.com/entry/654/. Or for more on the contest visit covercontest.runnersworld.com.