“It’s great, no downside,” said Russell Gardens Mayor Steve Kirschner as he announced his village’s recent approval of an IMA (Inter-Municipal Agreement) with the Village of Great Neck. Russell Gardens will save money by storing its salt (road salt for storm usage) at the Old Village’s salt storage shed. The two villages will share the profit resulting from this storage as opposed to a Nassau County storage facility. 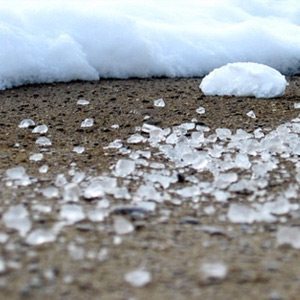 The Old Village approved this IMA at its Feb. 4 board of trustees meeting. This is a generic IMA, which will first be used for salt storage. Village of Great Neck Mayor Ralph Kreitzman explained that his village often uses an IMA in order to assist another village.

In this case, Russell Gardens workers will buy salt, load it on their own trucks, then unload it at the Old Village storage facility. Up until now, Kirschner said that Russell Gardens stored its salt with Nassau County, but when a storm hits and it is time to retrieve the salt, the county gives Russell Gardens a mixture of sand and salt.

The Old Village uses only salt, no sand. The mayor said that sand is harder to clean up and clogs storm drains.

The Old Village also stores salt for the Great Neck Park District and has IMA’s with other villages, such as Kensington and Saddle Rock, to sweep their village streets.

“We have the capacity, it’s no burden on us,” said Kreitzman. “We’re happy to help another village.” Kirschner said Kreitzman had approached him at a mayors’ meeting, offering use of his village’s salt shed. Kirschner thought: “Why not?” And his board of trustees voted their approval at Russell Gardens’ Feb. 6 board meeting.