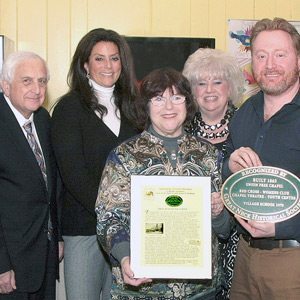 Built in 1863 as the first church on the Great Neck peninsula on land donated by Henry Allen, it was first known as the Union Free Chapel, then the Union Chapel. When the congregation dwindled, the building was donated to the Great Neck community. During World War I the building was used by the Red Cross and French Relief. Afterwards, it was the Women’s Club headquarters.

In 1922, it became the Chapel Theatre. Stars who performed there include: Ethel Barrymore, Clifton Webb, Fay Wray, and Katharine Hepburn. In 1947, when schools were crowded, the building housed two kindergarten groups. In 1950, the school district used it as a youth center for secondary school students and young adults. In 1970, it became the Village School. Except for the annex added in 1938, the exterior remains essentially unchanged after more than 150 years.

This article appeared in the Great Neck Record Issue 03.14.14.