The hearing on Feb. 19, at the Village of Great Neck, on the mayor’s proposed zoning changes for Middle Neck Road and East Shore Road was simultaneously videocast by streaming, but there was no video of the final half hour.

Starting at 7:30 p.m., the meeting went on for hours and late into the night as residents one after the other spoke their comments into the hearing record. The trustees then adjourned to an executive session for “advice of counsel.” At this point, the young man running the camera for the live streaming went home, as did almost all the residents.

I stayed. When the trustees came out of executive session and back into the meeting room, the village clerk and his assistant clerk spent some time trying to resume the video. They were unsuccessful.

Mr. Bee, the village attorney, was the one who spoke first. He addressed the board and gave a short review of the agreement they had reached behind closed doors. They were in accord that their Corridor plan presented by the consulting firm VHB should be set aside in favor of a revised plan. Mr. Bee gave a few examples of the topics that had moved the board to this decision: five story buildings, traffic, the two roadways in one plan.

In the alternative, they thought perhaps they could let the hearing on the first plan continue on March 5 so people had the chance to speak on the record about it, but this was weird because the comments would be irrelevant since the plan was being changed.

I was included in the discussion, so I pointed out that rushing from one hearing to the other hearing without a breath between would once again shut out the residents.

Mr. Bee provided a valuable wrinkle. The law requires 10 days advance notice to the public for a hearing. Since the mayor wants Mr. Bee to do the revision of the Corridor plan, and with the meeting date of March 5 only two weeks away, he would have only four days to accomplish the overhaul of the plan. In addition, it would then have to go through a pro forma process including paperwork to the Nassau County Planning Commission and an environmental review.

The mayor said (he thought) people had spent the evening complaining without offering ideas. My response was to say that he had handed the community a fait accompli, and he had thereby put us all in the position of trying to make him see the folly in the design of his Corridor plan. He had scheduled just one night for the hearing, and this confirmed the impression he was not seeking ideas.

Earlier in the evening during the hearing I spoke first, and then last. Both times at the microphone I weighed in on the subject of “process” (so essential, so lacking in glamour). I said we were making a legal record, that a hearing is different from a regular meeting, and I gave the example that a meeting has Open Time, when the imposition of a three-minute limitation is acceptable whereas in a hearing it is not. I also brought up the matter that the so-named Citizens Advisory Committee had functioned in violation of the Open Meetings Law of New York State. It met privately, and the mayor barred residents from sitting in and hearing the committee’s deliberations.

The first time I spoke the mayor savaged me a bit, but the second time my words were unmolested, and here, later, in the remnant of the public hearing well after midnight, where there was almost no public, the topic of discussion was most definitely process.

As for speculating on the reasons the mayor had an 11th-hour change of mind, one reason would be the mayors of two neighboring peninsular villages, Kensington and Thomaston. On behalf of their respective boards, they expressed their nonsupport for the East Shore Road portion of the mayor’s Corridor plan. Their displeasure, offered as it was in public, underscored what residents were saying by the hundreds.

With the East Shore Road segment presumably gone, any changes to the Middle Neck Road Corridor plan would be due to the outpouring of sentiment at the microphone, delivered as some truly eloquent and sentient statements by the residents.

It is yet to be seen if alterations to the Middle Neck Road Corridor plan will be merely cosmetic—“a bone to a dog” as one resident put it later.

At the hearing, I distributed two different handouts, which can be read below. I had 125 copies of each and I didn’t have enough. This gives an approximation of the attendance.

Through the VHB presentation two weeks earlier on Feb. 5, the impetus for the plan (as expressed by the mayor) was the need for lots of apartments, lots of new apartments, in taller apartment buildings, to answer to what turned out to be a nonexistent “housing crisis.” By the Feb. 19 hearing, the mayor introduced a new impetus: The Middle Neck Road Corridor plan is a financial necessity for the village. Without it, the mayor said, they will have to raise taxes.

There are village residents doing an in-depth examination of the mayor’s plan for Middle Neck Road, and it is neither our housing nor our taxes that drives this plan. There is an underlying attempt, written into the changes to the village zoning code, to give the trustees freedom to approve anything they want to approve. Protest all they might that they will be fair to us and safeguard our suburb and our homes, they want changes to the zoning code that give them unprecedented power and hold them to scout’s honor, cross my heart and hope to die, which is certainly not a standard for elected officials.

Among those powers is the ability to sell off, and trade off, village property to developers. Here lies one hidden cost of the mayor’s Corridor plan and the changes to the zoning code. The schools and the parks will not be the only casualties. 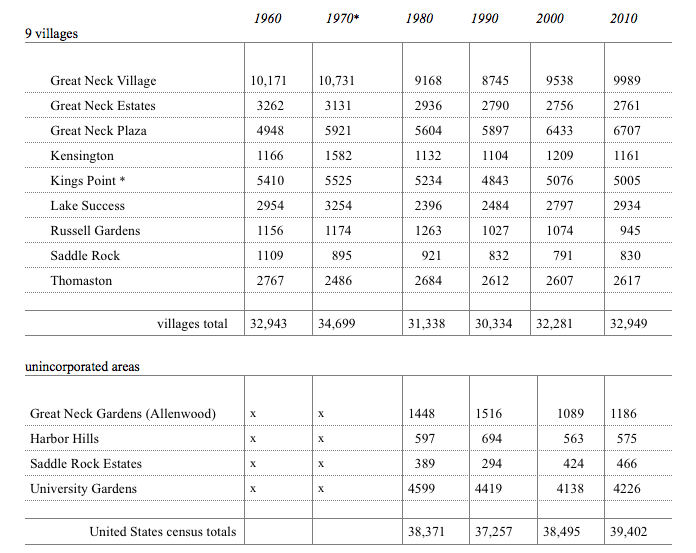 This is in regard to Mayor Bral’s plan for the Village of Great Neck, as mirrored in VHB’s presentation 2/5/2019.

Other residents have spoken and will speak about the plan, with its disingenuous “facts” and its damaging impact. This page on population is one of the many pieces of missing information.

We live on a peninsula, a protected haven. No one goes through Great Neck to arrive somewhere else. The population has fluctuated for half a century and yet, while the people come and go, the numbers have remained stable, regulated by our geography and the natural limitations imposed by the shoreline.

We are surrounded by water, but, rather less noticeable, we have water under us that curtails where and how we build. Our drinking water comes from wells in our aquifers, not from an upstate reservoir. From the tip of Kings Point to south of Old Mill Road and beyond, the water should be a central factor in everything we do.

We have 3 roadways for ingress and egress and these, like our water, should be a central factor: Clog one and eventually you clog them all.

We have a cadre of volunteer firefighters and EMTs, the embodiment of the generations who founded and formed this community. The addition of a private, for-profit assisted living facilty deep in the peninsula far from a hospital, at the juncture of two congested roadways, would be pure cynicism. It would also accrue a hidden cost on our taxes.

Overburden our public services (the pipes and trucks that rid us of garbage and sewage) and watch the cost rise.

With the mayor’s plan, our peninsula would be unrecognizable and the pleasure of living here erased.

In September 2018, the Board of Trustees of the Village of Great Neck, having expressed approval for a community center on Steamboat Road, sent the application to the Nassau County Planning Commission for its review as required by law. In December 2018, the NCPC voted its rejection of the plan.

Obtained by FOIL (Freedom of Information Law), here are some excerpts from the NCPC resolution 10278-18. Even though we have been unaware, the county is protecting our suburb of private homes even as the mayor and trustees of the village do not.

“Whereas the staff of the Nassau County Planning Commission has inspected the subject property in the field, has reviewed the request of the applicant, and considered existing ordinances and zoning regulations, and

“Whereas the property is located within 500 feet of…a county road, and

“Whereas to the west, east and south are residences in a non-subdivision setting….The roadway provides access to the United States Merchant Marine Academy….

“Now therefore be it resolved that after due deliberation and consideration, the Nassau County Planning Commission finds:

•  The proposed community center represents the over-intensification of development of the almost two-acre subject property that will result in much of the property being covered by impervious surface…and the wholesale elimination of the site’s natural features including the removal of essentially all the trees on the property. Such a large-scale project does not conform to the predominant residential character of the surrounding neighborhood….

•  While the Traffic Analysis concluded no adverse traffic impact from the facility, a community center of the size and scope that is being proposed can potentially have an adverse impact on Steamboat Road from a traffic flow and traffic safety standpoint as Steamboat is a narrow two-lane through roadway without the benefit of a wide center median or left-turning lanes.

•  Approval of this project may establish a precedent for granting other large-scale non-residential projects along Steamboat Road that may eventually change the predominant character of the area.

“And be it further resolved that the Nassau County Planning Commission hereby recommends DISAPPROVAL of the aforementioned as provided by law.”