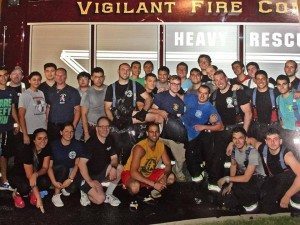 Shortly after 6:15 pm this past  Saturday, Vigilant Fire Company Probationary Firefighter Edwin Kokhabi was at Memorial Field on Fairview Avenue in Great Neck playing basketball with friends when he heard a woman screaming for anyone who knew CPR. Having learned CPR just two weeks earlier as part of his initial training, Kokhabi didn’t hesitate and ran over to help. When he arrived on the soccer field he found a fourty-six year old male lying face down. Feeling no pulse, Kokhabi’s instincts took over and he started giving chest compressions until the Nassau County Police arrived and took over from him.

At 6:21, the Vigilant Fire Company was officially notified for a male in cardiac arrest. Three minutes later, Vigilant Paramedic, Steven Blocker arrived, confirmed a patient in cardiac arrest, and immediately started advanced care. The ambulance was two minutes behind Blocker with additional personnel and First Assistant Chief Joshua Charry, another Paramedic was on scene shortly thereafter. Blocker, Charry, and the other members of the Vigilant Fire Company spent the next 15 minutes working in the middle of the soccer field shocking the patient’s heart four times before a pulse returned. They then transported the patient to North Shore Hospital in Manhasset where he is currently hospitalized in critical but stable condition.

When asked about his instincts, Kokhabi stated, “I just did what Firefighter Daniel Behnam taught me to do in training. It wasn’t just me, it was the Police Officers, the other members and Paramedics Charry and Blocker who did most of the work. They deserve the credit.” Upon hearing the story, Vigilant Chief, Joshua Forst said, “This event goes to show that any member of the community can join the Fire Company and make a difference immediately. Despite only being a member of the Fire Company for a month, Probationary Firefighter Kokhabi showed the type of instincts of a seasoned veteran member. Our members spend countless hours training for these moments and I am proud that Probationary Firefighter Kokahbi was able to positively affect the outcome by using his training.”

The Vigilant Fire Company is an all volunteer fire company which provides fire and heavy rescue services to the villages of Great Neck Plaza, Kensington, Great Neck Estates, parts of Thomaston and the unincorporated area of the Town of North Hempstead on the Great Neck Peninsula.  The Vigilant Fire Company also provides all emergency medical services for the entire peninsula from the Long Island Railroad tracks north to the Long Island Sound.  Annually, the membership receives nearly 2,500 calls for emergency assistance.  To report a fire or medical emergency call 516-482-5000.  For other non-emergency questions call 516-487-1086 or email info@gnfd.org.