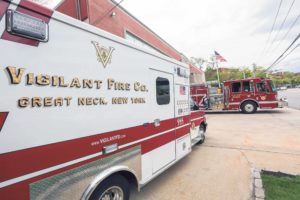 The Great Neck Vigilant Engine and Hook & Ladder Co., Inc., also known as Vigilant Fire Company, will host a meeting that welcomes the public’s input as Vigilant begins to explore direct billing for EMS services—an option that’s being examined at the request of local mayors. Peninsula residents north of the Long Island Rail Road are invited to attend the public forum and participate in a presentation that will be conducted by Vigilant’s billing attorney on Monday, June 19, at 7:30 p.m. at Great Neck North Middle School, 77 Polo Rd.

“Vigilant Fire Company is committed to being a transparent partner of the Great Neck community as we begin the preliminary steps to explore direct billing options at the request of local mayors. It is our top priority to listen to the questions and concerns residents have towards moving forward with this option and relay these matters to local elected officials,” said Vigilant Chairman David Weiss. “While we begin to collect data and conduct research on direct billing, we are opening this process to community feedback and determining the specific concerns of residents. This change would affect all of us, so all community comments deserve to be heard and considered.”

Vigilant Fire Company has been the EMS provider of the Great Neck community for 80 years, providing residents with an average five-minute response time using its three ambulances and three emergency response vehicles. Currently, each residence in the Vigilant Fire Company service area pays an all-encompassing, on average, $140 in taxes for emergency assistance services.

“At this time, nothing is set in stone regarding next steps,” said Weiss. “We believe it is imperative to offer the community a public education forum to this exploratory process for all residents to be fully informed. As fellow community members, everyone at Vigilant Fire Company wants to ensure that our Great Neck neighbors are involved from the onset of this process.”

For questions about the direct billing option, email community@vigilantfd.com.