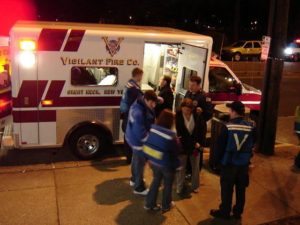 The Great Neck Vigilant Engine and Hook & Ladder Co., Inc., also known as the Vigilant Fire Company, is urging the mayors of Great Neck, Saddle Rock and Kings Point to hold a public meeting with community members to discuss a proposed change to the villages’ EMS provider—from the local service of Vigilant to Northwell Health. Currently, the communities on the Great Neck peninsula north of the Long Island Rail Road are serviced by Vigilant’s three ambulances and two emergency response vehicles stationed in Great Neck. If adopted, the Great Neck peninsula may soon be serviced by one ambulance stationed nearby with backup coming from much further away.

“As an unwavering community partner for more than 100 years, Vigilant Fire Company has always prioritized the safety and well-being of our fellow neighbors above all else,” said Josh Forst, chief of the Vigilant Fire Company. “With the proposed shift in emergency assistance, we are troubled that the mayors are valuing a slight price cut over a significant difference in response time. We here at Vigilant won’t accept a price tag on the health of our families and neighbors, and as residents we demand a public meeting to discuss this vital issue.”

This year, on average, each household and place of residence in the Vigilant Fire Company service area paid an all-encompassing $140 in taxes for state-of-the-art emergency assistance services. If this proposal is adopted, taxes will not go down and residents will face large out-of-pocket charges which, if not paid, may be sent to a collections agency.

“Based on the frequency and distance of calls we receive every day, it is not plausible for an EMS provider located outside of our service area to deliver the level of service the Great Neck community has grown to expect,” said Forst. “We provide residents with a 24/7 capacity to respond to multiple calls at once with trained professionals equipped to provide the finest possible care. This proposal runs the risk of putting the lives of residents in danger with a sharp increase in response time during health-related emergencies.”

The Vigilant/Northwell issue is the first public comment subject up for discussion on the agenda of the Village of Great Neck Board of Trustees meeting on Tuesday, March 7, at 7:30 p.m. at 61 Baker Hill Rd.

Read “Speak Out About Shift From Vigilant Ambulance At Village Board Meeting” and “We Already Have The Best Ambulance Provider.”