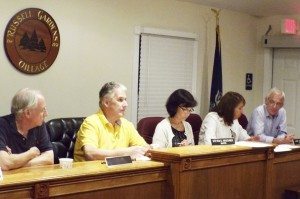 A decision is expected shortly in Russell Gardens as to whether or not the village will be installing video security at three troublesome spots in the small community of 248 private homes and four apartment buildings.

Earlier in the summer, the village’s pool (privately owned by the homeowners’ association) and adjacent public park suffered from nightly break-ins and vandalism, forcing the hiring of a security patrol. Village maintenance workers have also found ample evidence of drug use and drinking.

The patrols, combined with the installation of security cameras at the pool, stopped the problem at the pool, but still left residents concerned about safety.

The patrols were paid for jointly by the homeowners’ group and the village itself and covered other difficult areas in the village. Access to the village is easily gained from Northern Boulevard and South Middle Neck Road.

Mayor Steve Kirschner, in opening up a public hearing last week at Village Hall to hear residents’ view on security cameras, said that the Board of Trustees was considering placing cameras at the entrance to the park at Melbourne Road and Dunster Road, at the end of Tain Drive where an isolated path to Great Neck Road runs through Creek Park and on Clent Road where the village borders with Thomaston, also adjacent to Creek Park.

While many residents spoke in favor of installing video, others spoke of the need for better lighting throughout the village, feeling it would act as a strong deterrent. “You need to increase lighting,” one resident commented. “There’s no need to go into the park when it’s pitch-black.” Another resident added that walking home at night was difficult because of inadequate lighting.

Both Kirschner and Russell Gardens Association President Larry Chaleff reported less than satisfactory responses from the Third Precinct when they asked for help with village security issues.

“I’ve called the Third Precinct to see if they could get a car down there and it went for naught,” said the Mayor, referring to problems in the park and pool.

Chaleff revealed his dealings with the police in more detail. “I had a meeting with the Third Precinct and to reiterate what Steve said, the inspector basically told me…‘we don’t have the manpower,’” Chaleff said.

“The inspector actually intimated to me that we probably should get (our own) security which led us ultimately to do the security service. The police really do not have the resources. But what they did say is that if you put in video and have something that you can show us, they would basically put more of an effort into seeing what they could do, not promising that they would do anything, but seeing what they could do to help.”

The village recently removed several park benches and a chess table feeling that it would discourage loitering. The benches were purchased by the homeowners’ association and positioned in the pool area.

Chaleff gave the audience at the hearing good reason to favor cameras. “I can tell you that after we put in the video cameras, we haven’t had one issue at the pool.”

Chaleff also reported that he had often observed cars parked at the end of Tain Drive, near Creek Park, late at night. “There is no practical reason for someone to be going into that area at one or two in the morning.”

Kirschner, earlier in the meeting, acknowledged the concern about privacy. “There are some people who think (the cameras) are a wonderful idea,” he said. “But there are residents who feel that ‘I don’t want cameras knowing where I’m walking, who I’m walking with and knowing my business.’ There are others who feel that the trade off, as far as privacy, is worth it.“

The Mayor said that he would soon inform residents of any decision by letter and email.