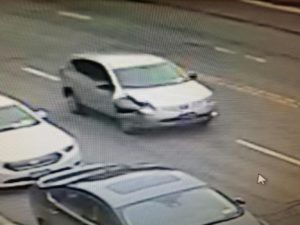 The 43-year-old man who was struck by a car while attempting to walk across Middle Neck Road at Barstow Road in Thomaston last Friday morning has succumbed to his injuries and was pronounced dead by a hospital physician. His name is being withheld at this time.

After hitting the pedestrian on Friday, Sept. 30, at 9:53 a.m., the driver of the car that was heading southbound left the scene of the accident.

As a result of the collision, the pedestrian suffered multiple trauma injuries, was transported to an area hospital and was listed in serious condition.

Witnesses described the vehicle as being a 2009 to 2015 Nissan Rogue in gray or light blue/gray. The car has extensive damage to the passenger side headlight and fender area.

Crime Stoppers and the Nassau County Police Department Vehicular Crimes and Reconstruction Section are seeking the public’s help to locate the vehicle as well as the driver of the vehicle, and request that anyone with information regarding this incident call Crime Stoppers at 800-244-TIPS. All callers will remain anonymous and could receive up to a $5,000 reward.

Read “Hit and Run on Middle Neck Road” and “A Plea From The Wife Of The Hit-And-Run Victim.”