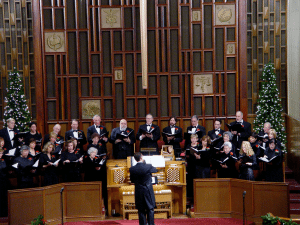 Celebrating its 26th year of classical choral performances, the Varsity Choral Society (VCS) will present its 26th Annual Holiday Concert on Sunday, Dec. 20, at 4 p.m. at the Congregational Church of Manhasset.

Led by Director Craig S. Tocher and accompanied by an orchestra comprised of strings, oboes, trumpets, organ and timpani, VCS will perform “Dettingen Te Deum” by George Frideric Handel and Christmas songs arranged by John Rutter. Soloists will be Jason Hendrix (of the Metropolitan Opera), Melissa Maravell (formerly of the New York City Opera), April Lindevald (formerly of the New York City Opera and currently a soloist with the Congregational Church of Manhasset), Molly Davey, Robert B.G. Horowitz, Roger Feuss and Joseph d’Angelo, as well as a trio performed by Nancy Morris, Lynne Stebbins and Jan Richardson. The evening will conclude with a traditional audience sing-along of favorite Christmas carols.

VCS’s membership consists of both professional and amateur vocalists from Great Neck, Manhasset and the greater Town of North Hempstead. Each year, the choir embraces ambitious programs and has built a faithful audience—its concerts regularly attracting more than 300 people.

“Our members have such diverse backgrounds and careers,” said Horowitz, who founded VCS in 1989. “But what’s kept us going strong for 26 years is shared love of fine choral music. Our audience is as devoted as we are and that makes every concert a real celebration.”

VCS is the specialized choral division within Play Troupe, Inc. It was originally formed to honor Jerald B. Stone, a choral director at Paul D. Schreiber High School in Port Washington, who led a school ensemble named “The Varsity Choir” and later served as VCS’s first director. Stone inspired his students to pursue excellence in music and forge long-lasting collaborations—a legacy now carried forward by Tocher and the current ensemble.

Tickets to the Annual Holiday Concert are $20 and will be available at the door on the day of the performance. The Congregational Church of Manhasset is located at 1845 Northern Blvd. in Manhasset. For more information about the event, contact redhorowitz@gmail.com.