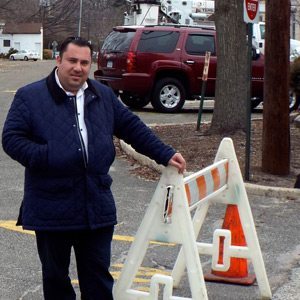 The Great Neck Park District and the Shop Delight supermarket on Welwyn Road launched a trial project together last Sunday aimed at easing the lack of adequate parking adjacent to the store and the resultant congestion that has plagued the Great Neck Plaza since the store opened seven years ago.

The trial, which will run for one month, involves the Park District commuter parking lot directly across from the store and involves valet parking on Wednesdays, Thursdays, Fridays and Sundays. Shoppers and motorists will face some initial confusion as the entrance and exit driveways to the lot will be changed during the hours that the system operates, all day Sunday, and 9 a.m. to 4:30 p.m. on the three weekdays. Commuters who arrive early in the morning to take the railroad will not see any change.

Since shopper vehicles will block commuter cars during those operational hours, customers must enter only through the entrance closest to the Post office (on Shoreward Drive) and leave their keys with Shop Delight personnel stationed in the lot. This will allow cars to be moved if a commuter returns prior to 4:30 and needs to leave. The valet system will be suspended from 4:30 to 7 P.M. to allow commuters to retrieve their cars directly and exit as usual. When the store has evening hours, the system will again be in operation.

Drivers can park by themselves on Sunday (a day when the lot has light usage) but still must obtain a voucher from the attendant.

Shoppers will also find that the driveway in the middle of the lot will be closed and that the entrance nearest the traffic circle will be the only way to exit. Temporary “Do Not Enter” signs will be posted there as a reminder. The signs will be removed daily when the system is not in effect.

The Plaza is not involved in the arrangements but the Mayor Jean Celender and the Board of Trustees have been in discussion with Shop Delight about possible solutions to the problems of double parkers, traffic congestion and pedestrian safety for months. One of Shop Delight’s owners, Eddie Yakubov, was on hand Sunday morning to observe the trial’s start, as was Park District Commissioner Dan Nachmanoff.

Shop Delight has also hired VHB Engineering to do a traffic study and work with the Plaza in hopes of finding feasible solutions. Beside the cost of hiring VHB, the store is providing the personnel to run the valet system and has promised to pay for all costs associated with using the lot. The Park District is receiving $2,400 from the store for the one-month trial.

“I’m very happy with the Plaza,” Yakubov commented on the ongoing discussions between his traffic consultants and the village. “The mayor and the board work very hard to make it a better place to live and they’re doing a lot of good things like fixing the streets.”

Yakubov expressed concern about pedestrian safety when it was pointed out that shoppers leaving the store for their cars would now have to walk up to the traffic circle to use the crosswalk. “I’d like our customers to take the time to cross safely,” he said. Store personnel will help shoppers push their carts across the street and will also bring the emptied carts back to the store.

In the future, he hopes that the village will agree to paint a crosswalk leading from his store entrance directly across to the lot. Nachmanoff said that the district could easily remove part of the lot fence where the crosswalk would meet.

“We feel we’re doing this trial as a public service,” explained Nachmanoff. “We’re trying to help things any way that we can. The times and days are in flux and we’ll see how it works out. We want to make sure that it works, that the shoppers are happy with it and that the people in the neighborhood are happy with it. If problems develop, we’ll have to check it out. That’s why we’re doing it for just one month.”