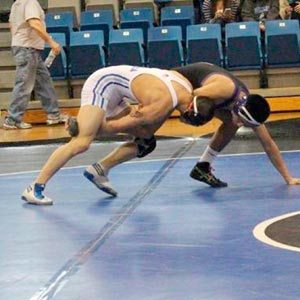 The USMMA wrestling team knocked off #24 NYU, 21-16, and narrowly fell to #17 Roger Williams, 17-16, this past Saturday afternoon inside O’Hara Hall. Mike Mui picked up two victories, including a pin against Yuayn Wayne of NYU. Nathan Twito, Josh Miller, Tyler Russell, and Brian Walker all earned a win in both dual meets.

Twito faced an early 5-0 deficit in his match against the Hawks’ Dante Porrazzo. But the freshman would score 10 unanswered points en route to the 10-5 triumph. Miller picked up a 9-1 major decision at 174 pounds against Roger Williams to the bring the Mariners within three at 13-10. However, Roger Williams got the four points back in an 11-0 win from David Welch. Russell nearly got his own major decision at 197 pounds but a last second escape ended his bout at 10-3. Walker earned a victory at heavyweight but the three points was not enough to overcome Roger Williams as the Hawks escaped with a 17-16 decision.

Mui made quick work of his opponent against the Violets with a first period pin while Isaac Hammonds and Twito posted back-to-back decisions to stake the Mariners to a 12-0 cushion. However, NYU stormed back to take the next three bouts, including one pin fall, to tie the match at 12-12.

Miller broke the streak with a 10-3 verdict but the Violets went back on top, 16-15, with a major decision at 184 pounds. Russell and Walker’s back-to-back wins secured Merchant Marine’s victory over nationally ranked and Centennial Conference rival NYU.

USMMA will return to action after the holiday break, Jan. 4, at Hunter.