When Emanuel Weinstock was drafted in 1944, he told the local draft board that he would make a rotten soldier. He explained that he was already 31 years old and was a wedding photographer. “Terrific,” he was told. “We need combat photographers.” Because he was Jewish, Weinstock was told that he would be sent to the Pacific theater, rather than the European, to avoid the possibility of being sent to the concentration camps if he was captured.

While overseas, the draftee made an effort to write letters to his wife in Albany as often as possible. In each letter, he would enclose one 4-by-5-inch photographic negative. The military sensors were required to remove any photographs related to the war effort, so Private “Manny” Weinstock never sent home any of the pictures he took while in combat. Instead, he sent negatives that included images of Aborigines in Papua New Guinea, photographs he had taken of General Douglas MacArthur, as well as pictures of his buddies and him relaxing.

Some of these pictures were developed and placed in a family album, but most these old-fashioned negatives remained untouched and sat in a box that was tucked away in a bedroom closet.

Last week, longtime Great Neck resident Michael Weinstock took the stack of his grandpa’s negatives to Hi-Tech Studios on Grace Avenue, where he had the images printed for the very first time. The pictures not only included several extraordinary images of natives from Papua New Guinea, but the stack of negatives also included four pictures of a large Passover Seder that was hosted by the U.S. Army.

Two men wearing tallit (Jewish prayer shawls) were pictured standing at a microphone, appearing to conduct the service, while plates stacked with matzah and bottles of kosher wine filled the tables.

According to family members, Manny Weinstock would occasionally talk about the war and answer questions, but he never mentioned anything about the Seder. There is no question that he was in attendance, however. He appears in two of the photographs.

“My dad tells me that the photographers would sometimes take pictures and try to include their friends in the picture. Now I understand why,” Michael Weinstock told the Great Neck Record. “The photos are especially meaningful, because they show my grandfather as a young man with vibrant energy and an animated sense of humor. By the time I was born, he was already living in the veterans’ hospital and one of his legs had been amputated. He wasn’t exactly in the best of spirits.”

Chabad of Great Neck’s Rabbi Zevy Geisinsky expressed enthusiasm after seeing the pictures. “These photos are absolutely amazing. It’s a phenomenal reminder that while Hitler was trying to exterminate the Jews, the United States was embracing the Jews.”

Though it was originally believed that the Seder was held in the Philippines, where the photo unit had its headquarters, Michael Weinstock worked with a chaplain at the United States Merchant Marine Academy to try to determine where exactly the Seder was held. According to Isidor Kaufman’s Jews in World War II: The Story of 550,000 Fighters for Freedom, a Seder was held for 2,700 soldiers and sailors on the tiny island of Guam. Before Michael Weinstock had these negatives developed, no known pictures of this event existed. 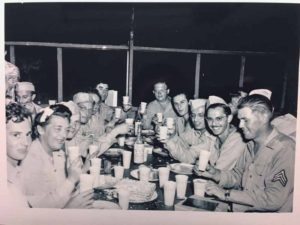 Six months after this momentous Seder, at which, according to Michael Weinstock, participants recited the line from the Seder as “Next year in the United States” instead of “Next year in Jerusalem,” Private Weinstock was present for the unconditional surrender of all Japanese forces in the Philippines. The signing of the treaty was front-page news across the globe and signified the end of the war.

Carl Mydans, a famous photographer for Life magazine, captured the event in a panoramic photo. Philippine National Artist Fernando Amorsolo later reproduced the photo as a large oil painting that now hangs above the fireplace in the living room of the U.S. Embassy in the Philippines’ American Residence in Baguio. Manny Weinstock can be spotted holding his camera in the foreground of the painting. 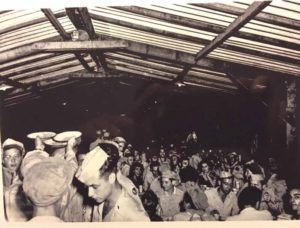 Manny Weinstock’s daughter, Elain Ikler Weinstock, still lives in Albany and was moved to see the pictures of her father celebrating the Passover holiday with other Jewish soldiers. “It was tough for him to be so far from us, especially during the holidays. It’s nice to know that he wasn’t all alone.”

Manny’s proud grandson, Michael Weinstock, who had spent 12 years as a volunteer firefighter and EMT with the Vigilant fire company, is especially appreciative of a fortuitous photograph that was taken of Hillary Rodham Clinton speaking with him at Ground Zero a couple days after 9/11.

How did Weinstock get a copy of this photograph? He explained, “I saw an army photographer standing around holding his camera and I immediately introduced myself and started bragging about my grandfather.”