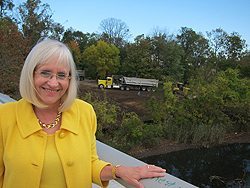 The county provided funds to improve drainage in the area and clean up the pond, which is supplied by waters running around the Great Neck Library and under the 9/11 Memorial Bridge to the Saddle Rick Grist Mill. The county decision to restore the pond and the surrounding area was years in the making, slightly delayed by Superstorm Sandy.
“We dredged the pond to create a new depth,” Galvin told the Great Neck Record, explaning that the deeper bottom and resulting higher water level will encourage new growth. Phase I of the restoration included dredging on the pond’s east and west sides, as well as wetlands restoration. Phase II consisted of finishing the dredging, repairing the weir, installing the fish ladder and finishing all other components. Galvin Bros. has a two-year grace period and during that time they will make any necessary changes.
Preparation started in October 2011, with the staging of equipment and site preparation moving ahead. At that time, county officials said that Udalls Pond would play a vital role in the watershed by serving as a repository for water runoff and preventing flooding. It was also thought that the pond would support more wildlife and provide a safe haven for migratory birds.
The story of the dredging project began in 2007 when the late Saddle Rock Village Mayor Leonard Samansky filed an official request with the county to restore the pond. When Judi Bosworth became a county legislator, she took up the cause and worked to convince fellow legislators and county officials that it was a much needed capital project in Great Neck.
At that time it was also noted that the pond was fringed with invasive plants that were so thick and tough that they crowded out other plants. This has become common in waterfront vistas and is an indicator of disturbed environments. The invasive plants were dug up and native plants planted. Native plants were selected not only to enhance aesthetics of the plantings for all seasons, but to provide seeds and berries for birds and other wildlife.
“It looks beautiful,” Galvin said.