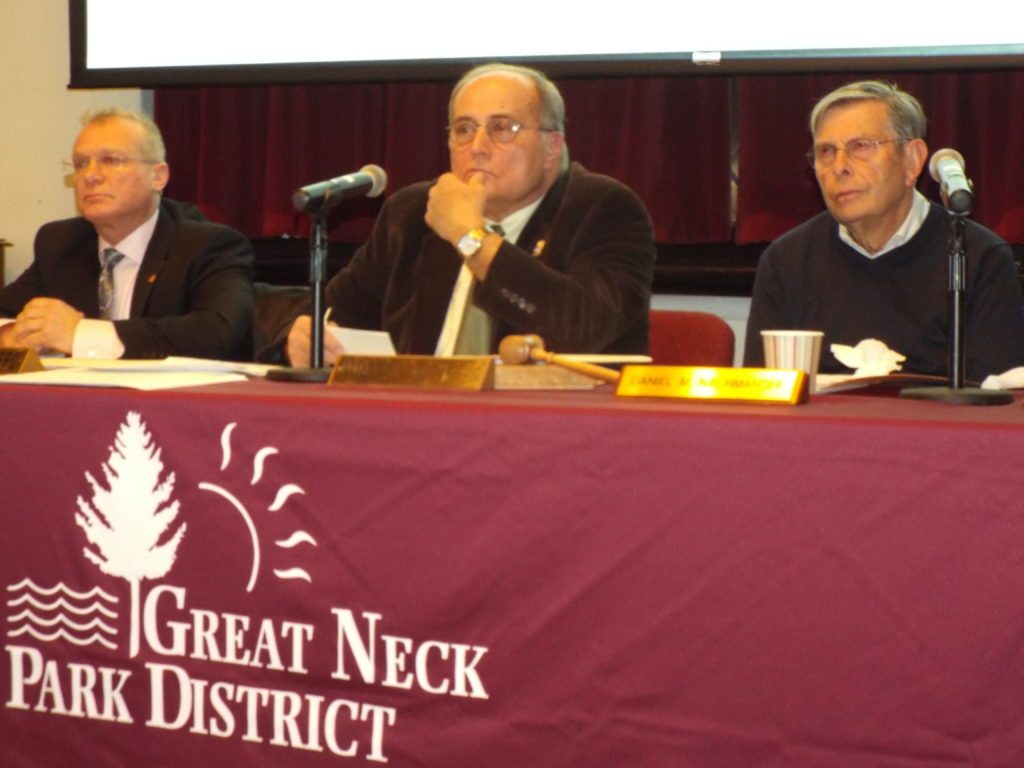 While Park District Commissioners are adamant on their plans to install a new baseball/soccer facility at Memorial Field as soon as possible, the question over whether or not to use artificial turf in the project remains a tough decision for them.

The Commissioners invited the public to an informal meeting about the issue last week at Great Neck House and listened to over 20 residents voice their opinions, ideas and feelings about it.

Commissioner Bob Lincoln chaired the meeting and opened by stating, “We are committed to building this field. The design has been done. We know that there’s a tremendous desire and need and support for it, (but) like everything else, we’ve got to make the right decision.

In regard to the very controversial issues surrounding artificial turf installations, Lincoln said, “As we did our research we came to realize that there is no environmental or health agency that says that it is safe without question or that it is hazardous without question.”

Lincoln briefed the audience on the extent of the research that has already been done for the approximate $800,000 project, funded by a bond issue last year. About half of the money would be for an artificial surface, 234 feet by 209 feet, with the rest being used for fencing, drainage, team dugouts and spectator facilities.

It was also pointed out that the project would only cover close to one sixth of Memorial Field. Lincoln added that the best time to begin construction, without having to shut down entirely, would be in the fall.

“Several of these chemicals are carcinogenic,” she said. “High temperatures recorded at field level can significantly increase the volatility of some of these chemicals…without long term field testing data available, no one has been convincing to say that (these) exposures are harmless.”

Many other speakers voiced their concerns about chemical exposure, children’s safety and the synthetic crumb rubber material’s effect on the environment.

Lincoln said earlier that high heat conditions were a concern. “One thing that clearly comes out are problems relevant to heat,” he commented. “The material can cause the field to heat up and there might have to be restrictions are far as use at certain times in hot weather.”

Many who spoke praised the idea of using the artificial surface. Michael Smolens, who’s headed the men’s soccer program at the Merchant Marine Academy for 21 years and is its Associate Athletic Director, stated that he had a very positive experience working with the synthetic that’s already installed at the Academy.

“As a parent and someone who’s played on these (artificial) fields for a long time,” said Eamonn Flood, Athletic Director at Great Neck North High, “I’m a proponent of it. If it rains, the field drains well. The best part of these fields is the consistency of the surface. It’s safer for young people to play on it.”

Added Chris Tipa, President of the Great Neck Little League, “This is something that we need and can get kids out from their video games and computers and get some exercise.”

Gary Levanthal brought up the idea of only using synthetic materials in the clay part of the infield, something that the Park District is also taking into consideration.

“Most of the games that are rained out are rained out, not because of the rain or the time that it rains,” said Levanthal. “It’s the infield, the part that’s dirt. That’s the area that’s affected the most, not the outfield. It gets too muddy.  It would seem to be a good compromise between the environmentalists and those want to play when the weather doesn’t allow it.”

For soccer games, the field would be laid out in a section of the outfield.

“We will make the decisions based on the very best information that we have available and we will do it in all good conscience to the very best of our ability,” Lincoln said at the close. “We care very much about making the right decision. We’re going to make this in a timely fashion and will reach out to other sources. This project is going to move forward.”

Lincoln added that the Park District would confer with the Village of Mineola about its study of the turf. That village has voted to spend $21,000 to investigate whether or not the materials can be safely used.