For decades, a Long Island Sound crossing from the North Shore to either Westchester or Connecticut has been proposed in the form of either a bridge or a tunnel. Now, the prospect has risen once again.

An informational meeting was held recently at Locust Valley High School to provide an update on the standing of this latest project—a proposed 18-mile-long tunnel from Syosset to Rye—and the impact it would have on communities, Long Island in general and, ultimately, New York State. A number of county legislators, state assembly members, village mayors, town council members and village trustees were in attendance at the meeting, organized by Bayville Mayor Paul Rupp and the Village Tunnel Committee.

In 2016, Governor Andrew Cuomo said in his State of the State address that he would make the tunnel a priority. A feasibility study was conducted and completed in December 2017, and the tunnel committee met with representatives from the governor’s office in late March, when the project was determined to be “practical, feasible and economically viable.”

Legislator Joshua Lafazan was one of the elected officials on hand to voice concerns over the environmental impact of a sound tunnel. 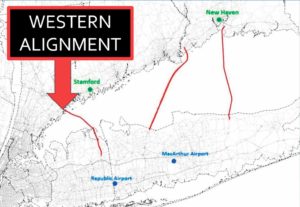 Legislator Arnie Drucker reiterated the potential for an environmental disaster, specifically how the tunnel’s construction and mere existence would impact the Island’s water supply.

“We are constantly jeopardizing that water supply, and drilling for years for a tunnel that could adversely affect it, can penetrate and have salt water intrusion into our aquifers is horrible,” said Drucker. “We are leaving this Earth in worse condition than we’ve found it and that is something we have to be cognizant of…whether it’s air pollution, water pollution, traffic congestion, these all have to be considered very carefully.”

“Drilling for this tunnel would go into the bedrock, cutting through the Magothy aquifer and Lloyd aquifer,” she said. “In the feasibility study itself, it admits that there’s a potential impact and this is something that will have to be considered and studied before they can begin drilling. However, no matter what their environmental impact study says, I would never feel comfortable with anyone saying they can guarantee it won’t have a risk to our groundwater—there’s no way they can guarantee us that. And if anything were to happen to those aquifers, Long Island would have absolutely no access to water.”

John Taylor, chairman of the committee, provided details on the design of the tunnel and noted that the main purpose for the tunnel is to haul freight—presumably to warehouses that would then be built on farmland out east—with a big push for the project coming from road and tunnel construction companies and warehouse companies. The proposed tunnel would be 18 miles long, with nine miles under the Long Island Sound and the other half underground in both Westchester and Long Island. On the Long Island side, the entrance and exits would be north of the Seaford-Oyster Bay Expressway and at Jericho Turnpike.

Committee members stressed that moving the traffic underground to a tunnel versus a bridge doesn’t lessen the impact on air quality, traffic congestion or the landscape of the area. When tunnels are built, ventilation shafts and emergency access is required. While the design is not finalized, committee members predict, based on the designs of other tunnel projects such as the Holland Tunnel, Lincoln Tunnel and the Big Dig in Boston, that a multistory building with the exhaust/ventilation shafts would be built on the shoreline of either Bayville, Centre Island or Oyster Bay.

The cost of the project is expected to be at least $31.5 billion; and with a toll of $20 per car each way, the annual toll revenue would be $520 to $556 million, according to the feasibility study. The study also indicated that construction would take eight years to complete once it begins; an environmental impact study will begin in September and construction could start in 2023, at the earliest.

In the 1970s, when a bridge to Bayville was a real possibility, local officials got involved and found a way to slow it down by forming a protected wetlands. This designation requires the state to perform an environmental impact study, which can take up to five years. Also in attendance was former Congressman Lester Wolff, who created the wildlife refuge law and explained the intent of its creation.

“At that time, we could not overcome the thrust of what [Robert] Moses was trying to do—the only way to do that was to go to a higher authority,” said Wolff, adding that the federal government needs to get involved by creating a marine park.

Finally, a major concern raised by the committee is the financial aspect.

“The taxpayers will be paying for this in one way or another,” said Joe Russo, who explained that the governor decided the state would create a tunnel authority that would be allowed to issue bonds and therefore circumvent funding from the state legislature.

Assemblyman Charles Lavine, however, later assured the audience that the assembly would do what it could to not let that happen.

“The governor does not have limitless power,” said Lavine, adding that the assembly members in Westchester are all currently against the project and all majority members on Long Island are also opposed. “I think we are all resolved that there will be no tunnel. However, you cannot let down your guard.”

For the complete presentation and more information, visit www.bayvilleny.gov.