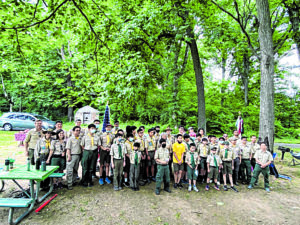 On a beautiful Sunday afternoon in June 2021, Troop 10 of Great Neck held their annual end of year picnic and Court of Honor at Christopher Morley Park. The scouts played in the park and then everyone had individually boxed Chinese lunches. With parents and siblings and even grandparents, the troop had several presentations to make. The ceremony was led by the Senior Patrol Leader, the youth leader of the troop. New scouts were formally welcomed. Merit Badges earned by the scouts over the past year were awarded. 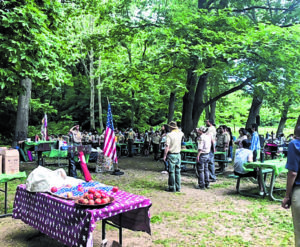 Several scouts were recognized for their achievements in advancing in rank, including the ranks of Tenderfoot, Second Class, First Class, Star and Life.

A separate Court of Honor will be held to recognize our new Eagle Scout, Thomas Lo and as of a few days prior to writing this article, Rick Xu just completed his Board of Review and is now our newest Eagle Scout.

A peaceful transition of power ensued as the outgoing Senior Patrol Leader installed our new SPL for the upcoming year.

The events from the completed year were reviewed, and despite pandemic restrictions, Troop 10 was able to do tent camping several times over the past eight months although they did have to travel to Pennsylvania and Connecticut where restrictions had been eased. The troop also participated in several service projects to aid the community including food drives and park clean-ups. Thomas’ Eagle project included making and donating more than 500 face masks early in the pandemic. In Allenwood Park and the Village Green, tree identification signs to enhance the enjoyment of these parks are the result of Rick’s Eagle project. After a difficult year, it was great to see everyone together. The troop will be attending summer camp in the Catskills in August and will reconvene for troop meetings in August.

Troop 10 meets at the Manhasset-Lakeville Fire Department on 25 Prospect St. on Mondays at 7:30 to 9 p.m. on school days. If you are interested in joining Troop 10, contact Dr. Dwight J Rosenstein at djrosenstein@gmail.com.

—Dr. Dwight Rosenstein is the scoutmaster for Troop 10