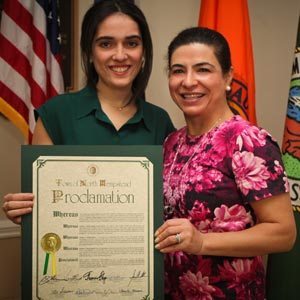 Superstorm Sandy not only flooded the region and washed out shorelines just over a year ago, it disrupted homes and families and in the process stole prized possessions. For many North Hempstead residents whose homes suffered damage, they lost keepsakes that captured momentous occasions in their lives.

For Monica Mobasser of Kings Point, however, her story of losing a treasured keepsake, a certificate of recognition she received in 2006 from former Town Supervisor Jon Kaiman and the North Hempstead Town Board, ended happily last week.

With her mother, Fariba, at her side, Monica was presented with a replacement certificate Nov. 21 by Town Councilwoman Anna Kaplan.

“The ravaging impact of Superstorm Sandy caused heartache for a lot of people,” Kaplan said. “By re-honoring Monica we are not only recognizing her for all her great charity work, but we are also playing a small role in the re-building process for her family.”

Monica was first honored for single-handedly raising over $10,000 for Pups for Peace, an Israeli organization founded in Los Angeles that trains dogs for highly skilled counter-terrorism work. She had just turned 13.

“We cherished this award,” her mother said. “It validated of all of Monica’s hard work and our family’s strong belief that helping other people is a beautiful thing.”

Motivated by the symbolism of the certificate and the fact that it’s a tangible reminder of her daughter’s spirit of compassion, Fariba Mobasser contacted Councilwoman Kaplan to ask for a replacement of the damaged certificate of recognition.

Mobasser, who is a recent graduate of NYU, was drawn from an early age to the work of Pups for Peace, a non-profit which uses donations to purchase trained bomb-sniffing dogs used to help save lives and minimize fatalities and injuries from terrorists acts such as suicide bombings. One of the trained dogs worked with the Israeli Defense Force.

Monica Mobasser has remained involved with Pups for Peace over the years and is still working to raise funds with the Iranian American Jewish Federation and Israel Defense Force.