They waited over 12 hours on Overlook Avenue, but two sisters from Great Neck finally got to meet and speak with popular TV and movie star Tina Fey during the actress’ one day visit to the Plaza to shoot scenes for her upcoming film, Sisters.

The Boverman sisters, Ariel, who is a human resources specialist, and Allegra, who is a photojournalist, are big fans of Fey 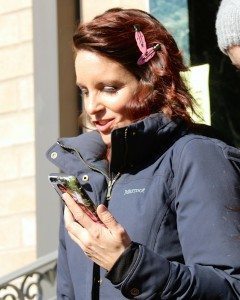 ’s work and devoted last Friday to trying to connect with her.

Fey, of Saturday Night Live and 30 Rock fame, was rarely seen outside during the day, staying inside to shoot and rehearse her scenes in an empty first floor apartment at One Overlook made up to look like it was in Florida (complete with fake palm trees).

The filming drew very little attention from passersby as the project stretched from early morning to almost midnight, even though heavy trucks and equipment lined both sides of the one block stretch of Overlook from South Middle Neck Road to Gilchrest Avenue. Over­look remained open to traffic all day.

Waiting to see Fey was made a lot easier for the Bovermans by the fact that Ariel has lived in the building for 13 years and had access to her own second floor apartment all day.

Several other residents of the building had access during the filming and shrugged off any hint of inconvenience caused by the project. Plaza Mayor Jean Celender was also an onlooker and had a chance to meet the actress, too.

“Who isn’t going to be excited about having Tina Fey in their apartment building in Great Neck in the most obscure building they would ever find in your whole life?,” said Ariel in minimizing her long wait and pointing out the irony of using her building to film a scene with a Florida setting.

“I don’t think it’s inconvenient at all,” she added. “I think it’s awesome. Our super looks like he’s loving it. I think it’s wonderful.”

Ariel and her sister could only catch a brief glimpse of Fey as the actress quickly and quietly exited the building at lunchtime. Still they persevered, killing time throughout the long day by chatting with many members of the production crew and several other Over­look residents who came out to watch.

The Plaza, in granting permission to the company to film, did receive a fee, as did the residents of One Overlook, but the amounts were not made available.

“My sister did finally get to speak with Tina Fey, very late in the evening,” said Allegra. “Tina came out to the food tent and was munching a bit on things. My sister talked for a few minutes with her and Tina asked her if the production was disruptive…and my sister said, ‘Not at all.’”

Allegra said she “joked about the sisterly connection (in relation to the irony of the film’s title) and Tina seemed to smile at that.” Allegra also said that the actress actually took time to take photographs with a few teenagers who were passing by.

Sisters is scheduled to be in theaters in mid-December and also stars Fey’s good friend and frequent collaborator, Amy Poehler. It’s a story about two sisters who are asked to come back home by their parents to clean out their childhood rooms prior to the sale of the house.

Another recent Fey film, This Is Where I Leave You, also spent one day filming in the Plaza in June of 2013, on Middle Neck Road. Fey did not participate that day but co-star Jason Bateman filmed several street scenes.