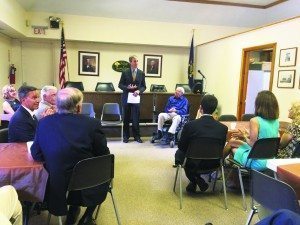 A World War II Army veteran, Stern was first elected mayor in 1997 and served until he retired last September. Stern was born in New Jersey in 1925. He has lived in Great Neck with his wife, Florence, for more than 50 years.

After retiring from the family’s watch repair business in 1986, Stern spent nine years in the Great Neck Public Schools as a volunteer.