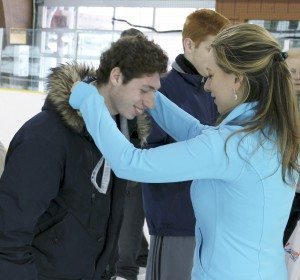 The Great Neck Park District, in partnership with the Great Neck Figure Skating Club and the Great Neck School District, completed the second season of the Therapeutic Skating program on Tuesday, April 8. Great Neck’s own Sarah Hughes, 2002 Olympic gold medalist, joined the festivities to honor the participants and encourage them to continue their efforts for success through skating. Sarah laced up, skated with the students, then, together with Park District Commissioners Ruth J. Tamarin and Robert A. Lincoln, Jr., helped award their trophies.

Cindy, who began the program two years ago, received a special plaque from the Park District for her dedication. Various Park and School District coaches, aides and staff also participated. Everyone is looking forward to the 2014-15 season with anticipation.