If you ask any chef how they came into their craft, most of the time the answer is simple: they were born into it. Such is the case for chef Donatella Arpaia. The Woodmere native grew up in the restaurant business, spending summers in Italy where her mother’s family made their own olive oil. It was also during her childhood when Arpaia’s father encouraged her to become an attorney, feeling that the education and training would benefit her. But one day in a restaurant kitchen changed everything.

“Food has always been an integral part of my life,” says Arpaia, who made the decision to attend law school after graduating from Kellenberg Memorial High School in Uniondale and furthering her studies at Fairfield University. She received her Juris Doctor from St. John’s University. “I was very focused on my studies and after I graduated, I passed the Bar exam and started working. I realized very quickly that practicing law was not something I would be happy doing nor something I was passionate about.”

Arpaia had her “a-ha moment” when she stopped at her brother’s restaurant on the way home from work. Short-staffed, she lent a helping hand, forever changing her career path.

“I immediately felt alive. In that moment, everything became clear. I knew that I had to go into the restaurant business and so I just did it and never looked back,” she says, making the decision to attend the French Culinary Institute and the Italian Culinary Academy. She opened her first restaurant, Bellini, in 1998, along with several others including partnerships with fellow chef Michael Psilakis.

Like many of her culinary colleagues, Arpaia truly loves feeding people, including her family (she is married to cardiac surgeon Allan Stewart and is a proud mom to her 6-year-old son, Alessandro). It makes her happy to know that with food, she is creating so much more than a meal, but rather “moments and memories,” among others. 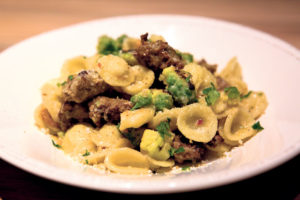 “I love the creativity and ever-changing aspect,” she says of cooking. “There’s always something new to learn, but my three must-have ingredients will always include an excellent olive oil, garlic and tomatoes. It’s obvious I’m Italian.”

With her roots embedded deep in Italian tradition, it was that culture that not only inspired, but shaped her culinary background.

“My heritage truly informs my cuisine. I am Italian and I grew up spending three months every year in Italy,” says Arpaia of her connection to the country. “My earliest food memories come from those early first bites. Although I dabble with other cuisines at times, Italian cuisine is the one I always go back to. Italian food is home to me.”

Arpaia recently made Italian home to Grand Central Terminal with her new venture, Prova Pizzabar. According to Arpaia, “Prova” means several things in Italian, such as “to try something new.”

“The pizza at Prova is a new creation, but ‘Prova’ can also mean ‘proof,’ which is something unique about our pizza—the proofing process occurs over two to three days, leading to a highly digestible and unique dough,” she says of the pizza, which customers can order in margherita, four cheese, mushroom and vegetable. Prova is the signature pizza, comprised of cherry tomatoes, burrata, baby arugula, speck and truffle oil. The menu also features salads, pastas, Stromboli and Arpaia’s famous meatballs.

Switching from pizza to pasta, the chef loves a good blend of ingredients in her dishes.

“The orecchiette with sausage, garlic, chili, Romanesco, Parmesan and breadcrumbs is perfect for fall,” she says of one of Prova’s pasta dishes. “Romanesco is a great fall ingredient—it’s hearty, wholesome and a comforting dish.”

With everything running smoothly at Prova (including plans for a second location), Arpaia is in the midst of launching her new website, which will feature an e-commerce site where customers can buy her famous meatballs as well as other products. Gearing up for the holiday season, Arpaia teamed up with the home and décor website Frontgate for her holiday collection, which she says “is truly a labor of love.” And that hardworking mindset and diligent persistence to follow her dreams is something the chef says is necessary for those aspiring to a life in the kitchen.

“The culinary world today is very different than when I started. Certain aspects, like opening your own restaurant, have become much more difficult,” says the chef, also noting that in other ways the opportunities have expanded greatly, especially for women. “I think it’s important, if you want to switch careers, to keep your job and start out with a part-time internship to truly understand what the lifestyle is all about. If you really love it and are passionate about it, then go for it.”