If all goes according to plan, the Village of Great Neck will boast a totally new street lighting system this fall.

It will be the first mass changeover since high-pressure sodium (HPS) lights replaced the mercury vapor or incandescent lamps at least 25 or 30 years ago. No one seems to remember exactly when that happened, but what is certain is that the current street light array is reaching the end of its useful life.

Great Neck leaders had explored the possibility of switching to LEDs years ago, but the price was prohibitive. The cost has now come down and what helped clinch the decision was when then-Senator Jack Martins secured a $250,000 grant from the New York State Energy Research and Development Authority (NYSERDA) in February 2016 to help finance the switch.

At the Aug. 1 meeting, the village board, following the recommendation of consultants Real Term Energy, chose an option that will replace 417 lantern style pole lamps with “cobra” style fixtures. The lantern posts will remain at 176. The existing cobras will be modified to accept LEDs. The rest consist of acorn (4) and flood styles (33). 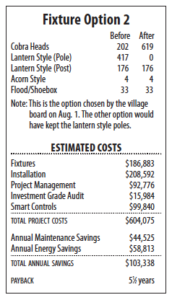 The changeover will cost the village about $600,000. It expects to spend $250,000 from cash on hand, money which will be reimbursed by the NYSERDA grant. The rest will come from its Community Benefit Fund.

To ensure it will be able to finance the replacement of 832 bulbs, the board authorized the issuing of a bond offering of up to $600,000. Clerk/Treasurer Joe Gill and Mayor Pedram Bral emphasized this was akin to an insurance policy, a precaution to cover any unforeseen eventuality. Both doubted that it would need the bond.

Michael Miller and Mark Carter of Real Term Energy were on hand to give a presentation, answer questions and make their final recommendations.

One of the debates that LED lights generates is about the Kelvin value. In lighting, this refers to the color temperature of a light source. Typically, a candle will have a 1,750K value, while an overcast day will be assigned 6,500K.

“Moonlight is as close to 4,000K as you’re going to get,” Miller explained. “This industry is sitting between 4,000K and 3,000K. The more you lower the energy of a lamp, the more energy it takes to provide lumens per watt.”

Miller said that public works equipment operators and first responders prefer 4,000K because it has a high color recognition (to tell the difference between, say, blood and oil).

Real Term also recommended, and the village agreed, to install smart hubs at each pole. This will enable the lights to be individually controlled via a central management system. Real Term would kick in the money for the software and help manage the system. Equipping posts with smart controls will cost about $100,000. Miller said it was better to install the control nodules at the same time as the lights, reducing installation costs considerably.

Carter said there could be a number of uses for the smart controls with added application software, including monitoring the speeds of cars and traffic counters—even cameras were a possibility. This aspect of the installation is part of a Smart City pilot program that Real Term would manage.

Residents then spoke on the proposal.

“That software has already been deployed,” said Carter.

Bardash also wondered if the company had done comparable jobs. Miller said the firm had overseen installation of more than 175,000 street lights.

To another question by Bardash, Gill said that Real Term had been vetted.

Amy Glass was not in favor of the cobra style. She thought it would change the look of the village. “It’s a matter of aesthetics. I prefer the lanterns,” she stated, and the mayor agreed with her.

Glass also argued against 4,000K, claiming, “They’re not brighter, they have an unpleasant bluish white.”

To another question Miller replied, “These lights are guaranteed for 10 years from the date of install, and it’s a full replacement warranty.”

There was only one bidder, Ankers Electric of Locust Valley. Miller said the firm “has been reviewed and vetted and has a history of working in your village.”