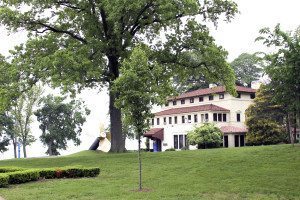 There is a special place in Great Neck hidden in a corner of Kings Point that is a little-known treasure—the American Merchant Marine Museum, a jewel that is filled with exhibits, replicas of famous ships and maritime history.

The museum invites the public to the opening reception of their new exhibit, How to Abandon Ship: The Sinking of the SS Robin Moor, on Friday, May 20, from 6 to 8 p.m. Business casual or uniform is required and refreshments will be served, courtesy of the Friends of the American Merchant Marine Museum. RSVP by May 15 to Museum@USMMA.edu. 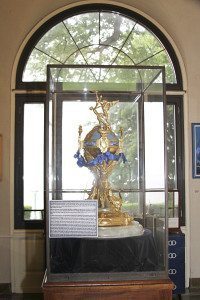 The SS Robin Moor was a “Hog Islander” steamship (cargo and transport ships built under government direction to fill the shortage of ships in the U.S. Merchant Marine during WWI). She sailed under the American flag from 1919 until being sunk by German submarine U-69 on May 21, 1941, before the U.S. had entered WWII, after allowing all passengers to disembark. Because the sinking involved a neutral nation’s ship in an area considered to be safe, it caused a political incident in the U.S. The Robin Moor was carrying nine officers, 29 crewmen, seven or eight passengers and a commercial cargo from New York to Mozambique via South Africa, without a protective convoy. On May 21, the ship was stopped by German submarine U-69 in the tropical Atlantic 750 miles west of the British-controlled port of Freetown, Sierra Leone. Although the Robin Moor was flying the flag of a neutral country, her mate was told by the U-boat crew that they had decided to “let us have it.” The ship’s passengers were allowed to board her lifeboats and the U-boat fired a torpedo at the rudder and shelled the bridge. Once the ship was scuttled, the submarine’s crew pulled up to Captain W.E. Myers’ lifeboat, left him with four tins of ersatz bread and two tins of butter and said the ship had been sunk by her own crew because she was carrying supplies to Germany’s enemy. 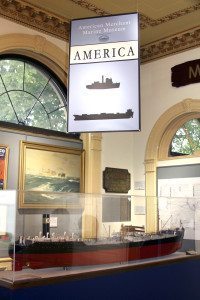 While President Franklin D. Roosevelt responded to the episode with strong words, the strength of his administration’s actions were disputed. His message to Congress described Germany’s decision to sink the ship as “a disclosure of policy and an example of method.” His message concluded: “In brief, we must take the sinking of the Robin Moor as a warning to the U.S. not to resist the Nazi movement of world conquest. It is a warning that the U.S. may use the high seas only with Nazi consent. Were we to yield on this we would inevitably submit to world domination at the hands of the leaders of the German Reich. We are not yielding and we do not propose to yield.” 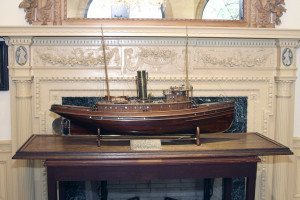 If you can’t make the museum’s reception, then visit the museum. The mansion is surrounded by gardens and lawns sloping down to the Sound. Once you enter the beautiful mansion, you will be transported to the days of yore with tales of high sea adventures, famous captains and ships that have shaped America’s history. The museum’s collection has a range of ship models spanning decades of maritime history, a collection of navigational tools, such as sextants, barometers and a Japanese sword surrendered by Vice Admiral Matomu Ugaki to Supreme Allied Commander and General of the Army Douglas MacArthur on Oct. 18, 1945. General MacArthur bestowed the sword and sheath (one of only five in existence) to the U.S. Merchant Marine Academy “as a memento to the valiant service rendered by the sons of the Academy in our struggle in the Pacific.” There is a collection of china from around the world, the 142 Gallery, dedicated to the 142 cadets lost in enemy action during WWII, plus maritime artwork. The museum is located at 300 Steamboat Rd. in Kings Point. Call 516-726-6047 for information. Hours are 10 a.m. to 3 p.m., Tuesday through Friday. 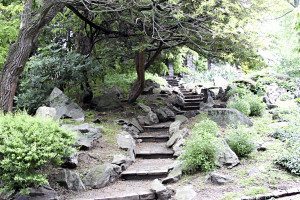