To my loyal readers: I wanted to update you on the cranberry mold. I’m sure you’ve spent sleepless nights waiting to find out whether it was a flip or a flop. Drumroll, please…

It was a mold to behold. Oohs and aahs erupted as the jiggly red beauty came out of the pan in all its glory. I am still the Mold Mensch. There was no gooey mess, as feared. I found the recipe in my junk drawer. It was a good thing, because the hot water component was three cups not one. I was saved from slime disaster.

The dinner was a success thanks to a rambunctious group of young folks chomping away at the goodies. No political opinions were allowed to be voiced and, so, therefore no angry voices were shouting at each other.

With Thanksgiving is behind us, we began slouching toward the next holiday extravaganza: Hanukkah and Christmas. Of course, new anxieties  began to erupt.

What should we give Aunt Tillie? She is a peripheral gift receiver, but we can’t leave her out. She always sends a basket of fruit or wine, which we don’t care for. It is a nice thought, but what should we reciprocate with? I thought about getting her a gift card to a restaurant that she likes. But, the problem is she complains about the food wherever she eats. Her gall bladder is mentioned as the culprit in all tasty cuisines. So, we’ll skip that, and surely some idea will pop up. Maybe, we will be off the hook and she will forget about us this year.

As the kids grow up, they are becoming too discriminating. A check is the best idea—or a gift card. What will they come up with for the adults this year? Last year, it was T-shirts emblazoned with a college insignia and other paraphernalia unnecessary for existence on this planet. I wish they would just save their money to spend on themselves. Though, of course, I am glad they were adult enough to think of us.

The airwaves are already blasting out holiday songs in a loop. There is no respite from Santa Claus and his elves. The decorations are becoming more glitzy this year. Red and gold with sparkles are de rigueur. 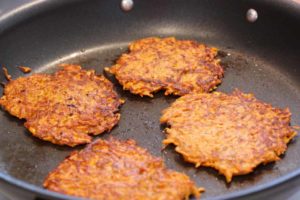 The best thing about Hanukkah is the potato pancakes. Thin and crispy ones are the best. My mother was the champion latke maker. She prepared them from scratch, using her worn-out hand grater. Somehow, she never nicked her fingers as she grated pounds of potatoes. The onions mixed in the batter was what made them exceptional. But, her latkes rarely made it to the table, as greedy hands plucked them from the wax paper she piled them on as fast as she flipped her lacy-crisp pancakes from the pan. This was one recipe I did retain from her canon of goodies. When I make them, I cheat a little and put the potatoes in the food processor. But, no one complains, as they crunch away.

I will try not to get too carried away with the holidays this year, though this is a hard promise to keep. The best thing for me to do is stay out of the stores, leave my computer off except when I really need it and not look at the email ads clogging up my in-box. The stores are rabid this year, trying to get my attention. I will not be seduced by bargains. I will just say no to phone messages soliciting stuff, and I will wear ear muffs to drown out the jolly music.

It’s alright to be a little aloof to all the hilarity surrounding you. I’m going to try. Now that the Thanksgiving anxiety has abated, I’m going to stay cool and relax.