Victoria Justice is one of today’s most popular movie, television, music and social networking stars. The 21-year-old actress has eight million followers on Twitter and 14 million “likes” registered on her Facebook page. More than 2.5 million people ‘follow’ her on Instagram.
And now she’s in Great Neck. 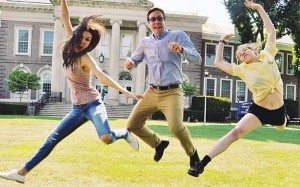 Justice has quietly begun filming a movie, The Outskirts, at Great Neck North High School. The cast of the movie—including Eden Sher, 22, who plays Sue Heck on the ABC TV series The Middle—figure to be shooting at various locations on both the Great Neck and Port Washington peninsulas into early August.

Before filming started early last week, both inside the building and outside on the field adjacent to the school at the intersection of Polo Road and William Penn Road, support personnel moved heavy equipment into the school, using a temporary wooden ramp on the front steps.
Nassau County police were present during the outdoor shoot. Given the popularity of the two stars and the fact that their presence in Great Neck has been the subject of numerous tweets, Instagram and Facebook posts, the producers were wary of any crowds of young people that might gather.

The crew is using the parking lot behind the school to store other equipment and the numerous vehicles associated with the production, minimizing street traffic and impact on the usually quiet streets near the school. There are no summer programs being held at the school as all activities are at North Middle.
Both the Great Neck Board of Education and the Village of Great Neck had to give their permission for the filming. The producers of the BCDF Pictures production were also required to pay a fee to use the location. The film will be released in theaters. 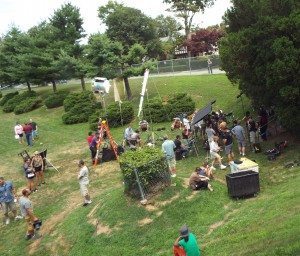 Claude Dal Farra, one of the producers, expressed appreciation for the town’s gracious acceptance of the cast and crew.
“Working in Great Neck this past month and preparing to shoot The Outskirts has been a wonderful experience,” he said. “The town has welcomed us with open arms and the people have been very supportive and enthusiastic. It is one of those beautiful moments when you look back and tell yourself that no other town would have been better for this movie.”
Justice and Sher portray high school best friends Jody and Mindy, who are bullied by the popular kids. As the story develops, the best friends reach out to other less-popular students as a way of rebelling against the troublesome alpha clique.
The film, being directed by Peter Hutchings, has been described as a cross between the popular teen movies Revenge of The Nerds and Mean Girls. Justice has become a youth favorite through her TV, recording and movie appearances. She was part of the Nickelodeon TV series Zoey 101 for four years beginning in 2005. She recently starred in another Nickelodeon series, Victorious, from which several music albums were released.

The Outskirts star even recently produced her own special line of stationery for June graduates, offering them encouraging words of advice to graduates, such as “Celebrate your personal achievements – no matter how big or small” and “Never let anyone take away your dream.”