Local teen Emilia Pedersen was invited to open one of the most highly anticipated fashion week shows in São Paolo and rocked in Brazil on April 24.

Pedersen, who is very popular in Brazilian media, was chosen as the new face to open Slama’s show. Though the designer was impressed with the teen, his decision to have her as the show opener went beyond her talent as a model.

“Emilia presented herself as a professional model and was the talk of the show at São Paolo Fashion Week,” said Slama. “The collection we presented, as a result of my collaboration with New Era, uses hip-hop as a reference. So, the look I created for Emilia sought to translate this musical movement. The shorts and the cut shirt allowed a light look at the bikini. That was the look I created especially for her, alluding to the song and also to the ‘South American Way,’ Emilia, no doubt, and the Brazilian body.”

At just 16 years old, Pedersen proved that she was meant to walk the runway among the stars. 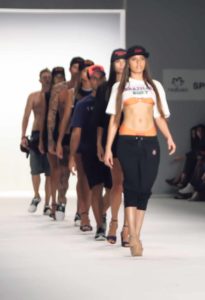 “When I first saw all these tall, skinny, elite top models, I felt a little bit embarrassed of my short and athletic build, but I was so happy to open the show as myself, without feeling like I had to be a certain body type,” said Pedersen. “I feel honored to have had this opportunity and responsibility to be the lead—this gave me the confidence to walk down the runway and rock it.”

Fashion photographer Fernanda Calfat described the fashion and the experience.

“The collection was a blend of American hip-hop style and Brazilian colors and patterns; it was the perfect match to have Emilia as the face of the new collection,” said Calfat. “I am impressed to see how she progressed so fast; she is so determined and focused, and all of this combined with her charm and elegance. She has a unique talent. Emilia shines on her own and everyone loves her because she is humble and adorable.” 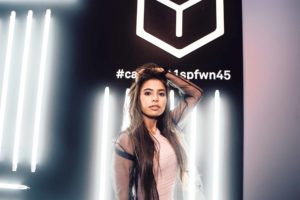 Pedersen is no ordinary teen. The Great Neck student is also working hard on her own music. Pedersen just finished recording at her label and will launch her debut album in the middle of the year. She is happy to have the support and understanding from the Great Neck North High School teachers and principal to allow her to pursue her dreams.