An annual event that celebrates North High’s various achievements in the arts, Artfest is especially unique because it is able to highlight the talent of both the school’s Fine Arts and Performing Arts program all within a single night. The event’s placement at the very end of the school calendar allows students to display their greatest works from throughout the year, while also giving the artists the chance to demonstrate the tremendous growth they have achieved since the year’s beginning.

As the school year approached its final weeks, parents, students and community members gathered to witness the spectacular talent of Great Neck North’s art students on display at this year’s beloved Artfest. 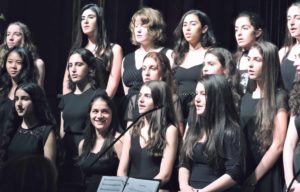 Artfest began with a display of the fine arts in the school’s Little Theatre. According to Joseph Giacalone, lead teacher of Fine Arts, the exhibit included “a collection of various two- and three-dimensional pieces, including paintings, sculptures, photography and other multimedia projects.”

The most striking aspect about the exhibit was its breathtaking diversity in style and genre. From among the various works in photography, senior Gabby Veras displayed her eye-catching images of a bustling New York City.

“The central idea of my work was an exploration of the heart of New York City, which I believe is its transportation system,” explained Veras. “I explored that by taking photos and layering them on Photoshop, as well as using different shutter speeds to really display the movement and the hustle of the city and its fast pace.” 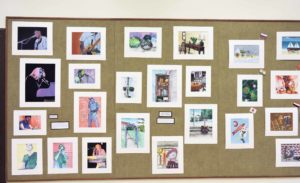 A few feet away stood the visual art collections of both Nina Raynor and Claire Dong, also seniors. Through her artistic works, Raynor explored “how music affects the senses on each individual,” with a focus on the effects it has on herself specifically.

“I enjoyed taking a normal picture and being able to turn it into something more psychedelic,” Raynor shared, while standing next to her vivid acrylic drawings.

Dong, on the other hand, used watercolor to “convey the light and the darkness that [she] found within the concept of beauty.”

In each piece, the subject of the painting had a specific tarp draped around it. This single tarp, consistent throughout all the pieces in the collection, was adorned with words that Dong had associated with beauty. 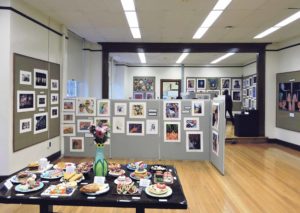 When reflecting on North’s fine arts program during her final weeks, Dong said, “The art program at North let me practice what I wanted to do. When I grew up, I always knew I liked to draw, but I never knew I would want to really pursue it as a career. Being in the art program here at North showed me that [a career in art] is a possibility and it gave me the freedom to do what I want to do.”

Dong will be attending the Parsons School of Design this fall.

In addition to the wide range of talented artists’ work on display from North’s Fine Arts Department, Artfest was equally devoted to the great success of the music program at Great Neck North. That night, concertgoers were lucky to witness Chorus, Symphonic Band and Symphony Orchestra all in one concert. 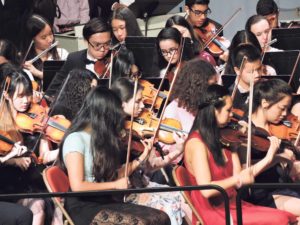 Chorus performed five songs, ranging from “Fa Una Canzona” by Orazio Vecchio to “They Can’t Take That Away from Me” by George Gershwin.

Framed as an end-of-the-year celebration of the arts, Artfest surely felt poignant to the seniors. Alexa Tubian, an alto, recounted her very last concert at North High by describing the night as one that was bittersweet.

“There are people in the chorus who were my first friends when I came to Great Neck and we have grown together the past four years,” Tubian reminisced. “I am really going to miss the group of people I call my second family.”

He told his team of star-studded musicians, “Thank you for bringing to life that room that I’ve spent so many hours in.” 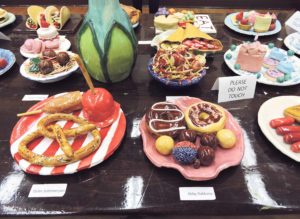 This year was an especially noteworthy one, since North’s music program received a Gold recognition from the Long Island Music Hall of Fame, as the audience was informed while a special banner was simultaneously unveiled by principal cellist Aral Soykan.

Chorus, Symphonic Band and Symphony Orchestra were also supplemented by other musical groups, such as North High’s A Capella and the North High Jazz Ensemble. The Jazz Ensemble even performed a song that was entirely composed by North’s very own saxophonist Molly Racsko.

One of the night’s highlights was when Rutkowski honored Sarah Tang, who was awarded second place in the U.S. House of Representatives Congressional Art Competition for New York District 3 for her painting “Sunset on the G String.” Fittingly enough, Tang’s painting was focused on the other aspect of North High’s Art Department, its music.

“Taking inspiration from the beautiful sunsets that can often be seen from the upstairs music room during late-afternoon rehearsals, I tried to create the effect of a sunset seeping through the windows and sweeping over the walls, chairs, stands and cellos of the interior of the room,” said Tang, describing her painting. “This painting pays tribute to both my experience in art class this year and the music program at North.

For Dr. Pamela Levy, department head of Fine and Performing Arts, it was her first Artfest at Great Neck North High.

“My favorite thing was how our entire department was able to work together and collaborate so that we could produce a successful Artfest,” she said proudly.

When asked how she felt now that Artfest has concluded, she immediately said, “I felt very joyful coming out of it because this is truly an amazing school.”