ONE’s outreach is large, with teams lobbying in Washington, DC; London; Berlin; and Paris, among others. Not surprisingly, these student volunteers have traveled far and wide for the cause. Matt, a graduate of Great Neck North High School, has been all over the world on behalf of ONE, spending part of 2015 in Munich, Germany. Josh, Matt’s younger brother, spent his summer in Washington, DC, lobbying on Capitol Hill.

But, the students also see tremendous value in efforts in and around their own community, which led them to meet with Suozzi at his Glen Cove office. The congressional nominee was happy to lend his support. 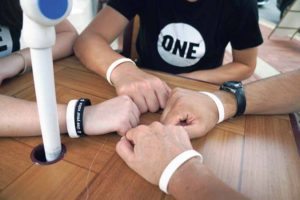 “Think about what the third-world problems are. People who can’t get aspirin for their children, and they die,” said Suozzi. “As bad and as inconvenient as it may be for us when the lights go out for a few days, these places have no electricity.”

ONE had also partnered with Steve Israel, who is not seeking reelection for his seat in the House of Representatives from New York’s third district, and whose seat Suozzi hopes to obtain come November. Israel has been a big supporter of ONE’s initiatives.

“We’re sorry to see Steve Israel go,” said Matt. “He could always be counted on to have a ONE wristband around his arm. We’re also excited for the enthusiasm of Mr. Suozzi.”

However important the various political figures may be to ONE’s efforts, it’s clear that the drive of the volunteer activists is what keeps ONE moving forward. The amazing work done by the Great Neck students isn’t lost on ONE activist Deborah Sable.

“I’m so proud of these kids,” said Sable, who supervises the group. “They have so much on their plates, but they still find time to do all of this.”

Though their plates are indeed full, the students have no intention of slowing their efforts with ONE. “It’s a labor of love,” Matt said.

For these Great Neck students, fighting extreme poverty around the world
is plenty of labor and even more love.