Asking for and giving help when it’s needed most

Like many parents, I was deeply affected by the news that a teenager in Hicksville ended his life last week. Angie and Hector Collazo blame their 17-year-old son Angelo’s suicide on years of bullying at his public school. Angelo was their only child. The parents are speaking out, and calling upon school administrators to do more to protect vulnerable children.

“To the parents of bullies, and bullies themselves, maybe you should think about it next time,” said Hector Collazo. “Before somebody that you know loses their life, like my son did.”

When it comes to teenage suicide, there is no shortage of finger pointing. Mental illness, social media, absentee parents of victims, oblivious parents of bullies, the opioid crisis—all of these can play a part in a preventable tragedy such as suicide.

Increasingly, there is a recognition that teenagers must act as “first responders” to look out for each other when it comes to risky and maybe even deadly choices. The U.S. Department of Justice estimates that one in four students has been bullied and one third of those bullied are often afraid to go to school.

Bullying online, also known as cyberbullying, means that victims have no escape from the torment, even when they are not in school. Suicide is also thought to be somewhat contagious among teenagers. Social media, such as Facebook, makes it easy for anguished teenagers to find each other online and to learn about other suicides. The Netflix series 13 Reasons Why also sends problematic mixed messages.

Sleep deprivation is also a major issue which may increase the risk of depression and suicide. Teens these days are on social media at all hours of the night. A study by the national Centers for Disease Control (CDC) found that insufficient sleep for teens, which was described as less than eight hours on average a night, was associated with cigarette, alcohol and marijuana use, sexual activity, not getting enough exercise, feeling sad or hopeless and seriously considering attempting suicide. Almost 70 percent of teens were not getting enough sleep, the CDC found.

For teenagers who are struggling with mental-health issues, addiction or poor impulse control, it is imperative that crisis intervention reach them before they make self-destructive decisions.

According to the CDC, suicide is the second-leading cause of death among those ages 15 to 24. One survey found that in a 12-month period, nearly 13.8 percent of high school students had seriously considered suicide, 10.9 percent had made a suicide plan and 6.3 percent attempted suicide at least once.

In many cases, the signs of suicide ideation are not recognized by others or, sometimes, there seems to be no warning. Too often, a case of depression or mental illness has gone undiagnosed.

A 2016 article in The New York Times reported that suicide in the United States had surged to the highest levels in nearly 30 years, with increases in nearly every age group. The rise was particularly steep for women and was substantial among middle-age Americans, ages 45 to 64. The increases were so widespread that they lifted the nation’s suicide rate to the highest since 1986.

Why Is Suicide on the Rise?

Experts believe that there is a link between suicides in middle age and rising rates of distress about jobs and personal finances. There are also links to the country’s opioid epidemic which has dominated recent headlines. But, there have been alarming increases in teen and even preteen suicides as well.

“This is part of the larger emerging pattern of evidence of the links between poverty, hopelessness and health,” said Robert D. Putnam, professor of public policy at Harvard University and the author of Our Kids, an investigation of new class divisions in America.

Julie Phillips, a professor of sociology at Rutgers University who has studied suicide among middle-age Americans, said social changes could be raising the risks. Marriage rates have
declined, particularly among less-educated Americans, while divorce rates have risen, leading to increased social isolation.

According to Phillips’s calculations, in 2005, unmarried middle-age men were 3.5 times more likely than married men to die from suicide, and their female counterparts were as much as 2.8 times more likely to kill themselves. The divorce rate has doubled for middle-age and older adults since the 1990s.

“Disappointed expectations of social and economic well-being among less-educated white men from the baby-boom generation may also be playing a role,” she said. Another possible explanation: an economy that has eaten away at the prospects of families on the lower rungs of the income ladder.

Overcoming the Secrecy and Shame of Mental Illness

Mental-health issues affect nearly every family, to a greater or lesser degree. One of the most important ways to alleviate the risk of suicide and other self-destructive behaviors is for individuals, families and communities to talk about it. Being open about a struggle with mental health can reduce the shame and secrecy associated with mental illness. This may empower people to seek help if they have problems and may encourage concerned friends or family members to refer their loved ones to services.

According to MentalHealth.gov, “Misperceptions, fears of social consequences, discomfort associated with talking about these issues with others and discrimination all tend to keep people silent. Meanwhile, if they get help, most people with mental illnesses can and do recover and lead happy, productive and full lives.”

Individual awareness of this issue can lead to steps to improve mental health in families, schools and communities. These include possible steps to establish or improve prevention of mental illnesses, promotion of mental health, public education and awareness, early identification, treatment, crisis response and recovery supports. 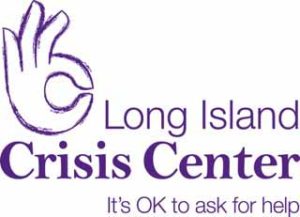 One of the most meaningful experiences I have had in the past year is the time I have spent volunteering at Long Island Crisis Center (LICC). During my weekly shifts as a counselor assistant at the Bellmore agency, I have met dozens of dedicated volunteers, many of whom have been donating their time, skills and efforts for 10 years or more.

Established in 1971, LICC is a private nonprofit agency that has existed as a 24-hours-a-day, 7-days-a-week, 365-days-a-year suicide-prevention and crisis-intervention hotline. During the past 46 years, it has grown from one hotline to eight and is staffed round-the-clock by volunteer counselors who undergo nine months of intensive training and respond
to more than 12,000 calls each year.

The lifesaving hotlines include the Crisis Center’s local line, 516-679-1111; calls routed from the national suicide prevention hotline, 800-273-TALK; Long Island Rail Road, a program initiated by the Crisis Center in response to the occurrence of suicides on railroad platforms; Nassau County’s 227-TALK Helpline; the Town of Hempstead Senior Connection Helpline; Children of Hope, an infant rescue program to prevent infanticide; Town of Huntington, requested by the town for its community; and is a backup for numerous Long Island agencies and private therapists. Especially popular with youth and young adults is the www.chatlive.li, an online and mobile counseling platform. 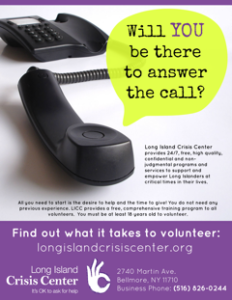 Individuals reach out to LICC for many reasons, including for thoughts of suicide, mental-health challenges, sexual assault, substance use, bullying and sexuality issues. LICC believes, “It’s OK to ask for help,” and it applies to “Any problem, Any time, Anyone.”

The agency’s goal is to support and empower Long Islanders at critical times in their lives. Throughout the day, a minimum of two trained counselors are available in the call center. Preadolescents through senior citizens who are in acute distress or need information or emotional support, can call any time, day or night. LICC staff keep the operation running smoothly and efficiently, and do extensive community outreach to schools throughout Long Island to reduce the incidence of suicide, bullying and self-injury and to lessen the stigma surrounding mental-health issues.

Callers to the Crisis Center are often at the lowest point of their lives and feel they have nowhere to turn. They are invariably in severe emotional crisis, sometimes feeling that ending their life is the answer to solving their problems. Many teenagers are distressed due to the breakup of a romantic relationship or an underlying mental-health or addiction issue.

Telephone calls are free of charge and confidential, and compassionate and caring LICC counselors provide short-term crisis counseling. Counselors listen without judgment and explore options for care and treatment, which could be as simple as going for a walk or talking to a friend. Other options could be a referral to a therapist or support and encouragement to stay in therapy. Many callers find relief just by talking about their concerns.

The Crisis Center established Pride for Youth (PFY) in 1993 to serve Long Island’s lesbian, gay, bisexual, transgender and questioning/queer (LGBTQ) youth and their families. With a disproportionate number of suicide calls received by the Crisis Center’s hotlines from the LGBTQ community, it became evident that this population was at a greater risk for suicide and suicide attempts. In fact, studies indicate that the group is at a four-time greater risk for suicide than its straight counterparts. Today, PFY delivers a cadre of free services to this at-risk population.

Over the years, LICC has directly helped more than one-million Long Islanders, including seniors, adults and youth with free, confidential services.

“At LICC, we believe that everyone has the right to free and anonymous help at any time, no matter who they are or what their needs might be,” said Associate Executive Director Theresa Buhse. “Our mission is to provide nonjudgmental services that help clients break through isolation, stabilize their situations and obtain the services they need, supporting healthy living and greater personal empowerment.”

The 200 volunteers counselors, who received extensive training before they were permitted to answer hotline calls, are the heart of the agency. Among the many volunteers are teachers, mental-health counselors, lawyers, stay-at-home dads, homemakers and retired professionals. Anyone older than age 18 can become a volunteer. Those interested in volunteering and possibly saving a life should read the information on volunteering at www.longislandcrisiscenter.org and call the business office at 516-826-0244 to schedule an interview.

Kings Point resident Jacqueline Harounian is a regular contributor to the Great Neck Record. She recently earned a graduate degree in Behavioral Forensic Psychology and volunteers her time as a counselor assistant at The Long Island Crisis Center.