The Great Neck South High auditorium was packed with people from the Great Neck community on Saturday, Jan. 9, for the annual Fashion Show, which showcased the many talents of the student body—and raised money for charity.

As lights illuminated the stage, student performers emerged in red and music filled the room, audience members knew they were in for “the greatest show on earth,” as the performance T-shirts promised.

The tradition of this Great Neck South High-produced annual event started in the 1980s when students approached former art teacher Amy Orange and proposed the idea. Eventually, Orange obtained permission from the school’s administration and the event was born. The show originally consisted of students modeling clothes from various local retailers, but has evolved to include themes and other distinct aspects.

The circus-themed show was divided into four “circus acts.” During each act, the models adopted the identity of either clowns, acrobats, lion tamers or magicians.

Although Great Neck South High boasts a multitude of events throughout the year, such as the annual musical, opera, cultural heritage performance and musical concerts, special education teacher and show advisor Kristen Serio-Campanelli highlighted the need for an unconventional show like this to serve “as an outlet for students to express themselves in unique ways.” 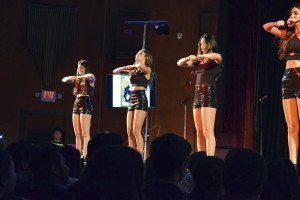 Fashion Show provides students with numerous opportunities that cannot be taught in a classroom setting. Senior Gabby Wong was able to showcase her artistic talents by designing dresses for the show. Unlike most of the other school events, Fashion Show is primarily organized by students.

Since more than 60 students ranging from 10th to 12th graders were involved in the show, this provided an opportunity for student coordinators Sydney Someck, Elizabeth Voigt, Becky Rojas and Kim Mishra, along with other senior cast members, to learn leadership skills as well as communication and time management. 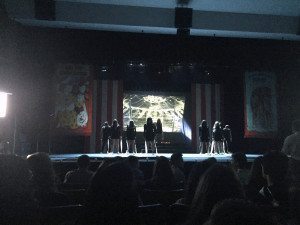 Students began preparing for this show in late September and rehearsed their dances at least three times a week ever since. Despite the preparation being “hard to balance with school work,” first-time cast member junior Josephine Zheng said that the feeling she had on stage was ineffable: “Walking on stage and seeing hundreds of eyes staring back at you was an experience I had never had before, and I just cannot describe the joy it made me feel knowing that all of these people had come out here to support our cause and our cast.”

This year’s proceeds will be donated equally to the school’s senior prom and Winthrop Cancer Center for Kids, which was chosen because one of the students in the show recently lost her cousin to cancer and wanted to help other kids fight the disease.