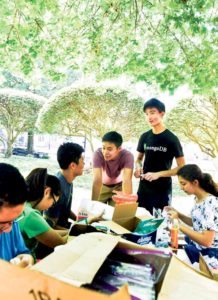 As the result of a random meeting, teenager Aric Zhuang was inspired to start a local project that has grown into an international charity. The Great Neck South student founded Hygiene for the Homeless, because he said he wanted to improve the lives of homeless people by providing something people usually don’t think of giving: hygiene kits.

The roots of Hygiene for the Homeless trace back two years, when Zhuang was inspired by a chance encounter during a winter-break outing.

“Two years ago, I met a homeless individual outside a pharmacy. I gave him some money, and then struck up a conversation with him. We sort of began to bond, and he told me more about the struggles people like him faced on a daily basis,” said Zhuang. “Hygiene was an utmost concern, sometimes even more important than money.” 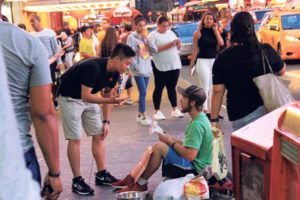 Even with access to a proper washing facility, many homeless shelters lack the resources to provide the necessary supplies and materials for homeless people to keep themselves clean.

Deciding to take action, Zhuang invited classmate Kevin Ho and others to join the new charitable organization. Members would collect unused and spare hygiene items to assemble kits—and distribute them across nearby towns and cities.

After a couple of successful distributions, where more than 100 kits were given out to the homeless, Zhuang decided to spread the word and developed the website, www.hygieneforthehomeless.org, and a Facebook page.

“We wanted others to impact their communities the same way, so we decided to start ‘branches’ or regionalized chapters of Hygiene for the Homeless where groups of people would give out hygiene kits to their local areas,” said Zhuang.

As time passed, Hygiene for the Homeless grew in size and scale, expanding to include more than a dozen branches in various states and counties within the United States, and most recently, Canada, while distributing more than 7,100 crucial items such as toothbrushes, combs, toothpaste, shampoo, soap and feminine-hygiene products. 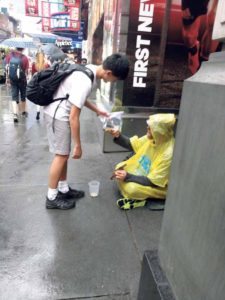 “I became convinced that good hygiene was just too important of a cause to ignore. It’s not just diseases or infections that improper hygiene leads to—it’s actually a lot more than that. It becomes incredibly difficult for the homeless to get jobs due to small issues like the inability to clean up for an interview or work. Not being able to look clean and prepared traps these people in a cycle of poverty and homelessness,” said Ho.

“The kits impacted the people in a way we never expected. They were glad to receive them not only for the hygienic benefits of the kits, but also because of the care and attention they usually never receive,” said Zhuang. “These people are human beings, too, and people need to realize that. To put what they’re dealing with into perspective, imagine how you would feel if you had no access to your shower for more than a week. Now multiply that feeling 52 times.”

Howard Johnson Hotels and Quality Inn partnered with Hygiene for the Homeless to provide unused toiletries that may serve as components of the charity’s hygiene kits. Not only will this partnership bring cleanliness to more individuals, but will also positively impact the environment by reducing waste among participating hotels.

Hygiene for the Homeless hopes to expand even further to partner with more hotels across the U.S., as well as create more branches to spread the mission.

“No matter how small a contribution, it has the potential to make a huge difference,” said Zhuang. “We encourage anyone with a passion to help others to work with us, and make a change, one kit at a time.”

Join the cause at www.hygieneforthehomeless.org.