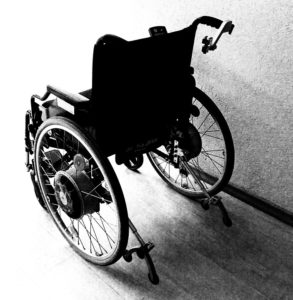 Since my aunt, who lives in Great Neck, was admitted for rehab a month ago, I continue to be distressed by conditions, some of which I will share. I visited her on Sunday and I was shocked at the treatment of patients at the center. I am deeply saddened by the neglect of my aunt and other patients, who were all in wheelchairs lined up against the wall, mostly all staring into space, mumbling and/or talking to themselves.

Ninety percent of the time, staff was merely talking to each other congregated at the central floor station.

My aunt was served a nauseating plate of pureed food. When properly prepared, puree can certainly look prettier and taste better. One staff member told me that she was not sure my aunt even needed pureed food, but it probably was “easier for the staff.” I replied that my aunt could starve if she won’t eat. The reply was “choke or starve.”

My aunt ate nothing. Without concern, a staff member took the tray away and said that dinner would be served in a few hours. I told her that nothing had been eaten. Not a drop of kindness or compassion was shown. I asked five times before a chocolate Ensure was brought to her to provide some nourishment.

“I was born with a brain and that’s a shame,” was the greeting I received from a permanent resident. Part of the natural order of things, out of our control, is everyone, including the owners of nursing homes, will be old someday and die. It doesn’t have to be the nightmare that it is.

Three times when I called to speak with my aunt, I was transferred to the wrong floor. A patient I’ll call Warren answered the phone at the central staff station. Once a successful businessman, after an illness he’d become a permanent resident. Warren, an obviously intelligent man, told me how that morning waking up at 7 a.m., he wanted to shower before breakfast. It was 9 a.m., and he still hadn’t been given a shower. Breakfast was one scrambled egg, two pieces of bacon and a cup of coffee and “good luck getting a second cup,” he said. “They just don’t feed us enough.” Another day he’d heard a patient crying from pain. When Warren tried to get help, a staff member responded, “Who cares?”

Another sad reality I personally witnessed last week when I visited my aunt, I saw a patient raise his hand and say he had to go to the bathroom. I told an aide, who was busy sorting through music to play. She acknowledged me, but continued with the music and the poor man sitting alone in his wheelchair continued to raise his hand, hoping for help.

On the bright side, there are a handful of upbeat professionals who manage to do a good job, despite the work environment. I spoke with a wonderful, compassionate nurse whom I instantly liked and has my full respect. She was still smiling after working there for
20 years. She said, “You get used to it.” After inquiring, she kindly informed me how understaffed they were. As we spoke, she opened my eyes. Staff was overworked and likely underpaid. Being human, they are hurting. Poor working conditions for staff results in vulnerable patients being neglected. They suffer, consequently patients suffer.

Sundays are the worst. On Sundays, there are zero activities or therapy. All the patients do is sleep, eat and stare into space with occasional visitors.

Seniors deserve respect and civil rights. It is pitiful how many are ignored and discarded.

More staff is needed. Maybe compassionate volunteers could offer companionship, music and art therapy and other fun, creative and soothing activities to the patients. Loving kindness is what hearts ache for.

I was wondering if local college grad students might enjoy internships at the facility. All involved would gain through the experience.

We all need love—it’s the cure.

Writing/English/communications majors could go to the facilities and interview patients capable of telling their life stories. Imagine what wonderful medicine that would be for all involved. Possibly some stories could be transcribed into children’s books.

Years ago, I worked as a special-needs guidance counselor at a public elementary school in Bedford Stuy. The children were mildly to moderately retarded, physically disabled and autistic. I coordinated/started a free program called Boot Camp for Tots. I contacted the officer in charge of the Marine Base in Brooklyn.

Once a month, six marines came to the school and worked out with the kids in gym, dressing them in marine vests and helmets. The children, staff and marines loved it and it was free. Finally, children who hardly had any positive male role models had caring, sensitive, entertaining men working with them. For the children, these men were superstars. Before this program happened, no one ever imagined marines would have time for the children, but they made time.

Maybe there could be a Boot Camp for Seniors that could be coordinated with physical therapists, recreation therapists or students from the United States Merchant Marine Academy in Kings Point.

I believe rehab/nursing home facilities need to improve. Taxpayers are paying for Medicare. Medicare should care how poorly their moneys are used. People who are too old and ill can not advocate for themselves.

God willing, we will all be old someday. Change is essential. Everyone who reads this, remember that someday you could end up in one of these nightmares. Please improve these awful conditions.