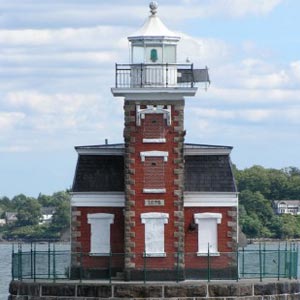 New life has been breathed into a community opportunity for seafarers and landlubbers alike … the restoration of the Stepping Stones Lighthouse, a historical treasure built in 1876 that, while still guiding commercial vessels and recreational boaters safely past treacherous rocks, has fallen into ruin.

On Aug. 26, an enthusiastic group of Great Neck activists met with Pamela Setchell, president of the Huntington Lighthouse Preservation Society to learn more about how a lighthouse can be saved.

Setchell, whose 28 years of involvement in saving the Huntington Lighthouse, means that she brings hands-on expertise in navigating red tape, recruiting and motivating volunteers, running successful, fun-filled fundraisers and shining a light on the real benefits to a community when a lighthouse is rescued from demolition.

She said: “Stepping Stones is a gorgeous lighthouse … and has good bones, although they are broken bones. The condition of the lighthouse is just sinful … there’s a hole in the roof, it’s ripped apart on the inside, but there’s good news. It’s considered a class one lighthouse, meaning that it’s a very important aid to navigation, and would be eligible for a number of grants.” The estimate for restoration is $4 million.

Setchell says it is essential that local groups from the surrounding communities “wrap their arms” around the project. The National Park Service has been divesting itself of lighthouses around the country and first awarded stewardship of the lighthouse to the Town of North Hempstead in 2008, but recently requested a return of the keys because the town had made no progress in the preservation. The federal agency reached out to Setchell to take over the responsibility of the project due to her proven track record.

After much investigation, Setchell decided to get involved after she became aware that local groups are prepared to roll up their sleeves to work on it. She made it clear that the Huntington Lighthouse Preservation Society will not have any connection to this project. She has formed a new not-for-profit, the Northeast Lighthouse Preservation Group to be the legal entity involved in making the official proposal for stewardship.

The most urgent need for the lighthouse is roof repair to protect it from the elements; however, a floating pier is needed for transferring material and equipment for construction. Setchell says that raising private funds for these two items is more efficient that trying to obtain a grant; grants will be needed later.

Town of North Hempstead Clerk Leslie Gross had reached out to encourage Setchell to get involved and at the meeting called her “dynamic … she knows the ropes and will be a fantastic steward.”

There were many different groups represented at the meeting as well as a number of interested individuals. Alice Kasten, president of the Great Neck Historical Society said that members of the society are very positive about the project and will offer their support.

Ilene Brandon, former commodore of the Stepping Stone Sailing Club and currently chairperson of the Park District’s Marine Advisory Committee commented, “As a sailor, I appreciate the navigational importance of Stepping Stones Lighthouse, marking safe passage for both recreational and commercial traffic. I also recognize the historical significance of this lighthouse and am very excited about the restoration efforts.”

Elizabeth Allen has been in touch with a number of yacht clubs on City Island who are quite interested in the project as well.

Great Neck Park District commissioners Ruth Tamarin, Robert Lincoln and Dan Nachmanoff offered park district support such as allowing a section of Steppingstone Park to be used for staging during any construction materials at the lighthouse, assistance in educational programs and offering Great Neck House for meetings.

Lincoln recollected that as a boy he liked to hear the sound of the fog horn back when it was operable. Currently, the lighthouse sends out its beacon powered by solar energy which is maintained by the Coast Guard.

If the lighthouse is not saved, eventually it will be knocked down, leaving a pile of rubble and a light on a metal stanchion.

Setchell brought with her two very active volunteers from Huntington, Frank DeLuca and Frank Scobbo. After the meeting, Scobbo took a number of people on his cruiser to view the lighthouse at close range, including this reporter.

According to Town of North Hempstead historian Howard Kroplick, the lighthouse style is considered Second Empire Victorian and the original optic was a Fifth Order Fresnel lens that gleamed red. The lighthouse was modernized in 1944 and was added to the National Register of Historic Places in September 2005.

Legend has it that the Siwanoy Indians in an epic battle with Habbomoko, the devil, forced him to retreat to Long Island. He was so angry that he hurled massive stones toward Connecticut and boulders all over the New England coast. Colonial maps referred to the area as the Devil’s Belt and the Devil’s Stepping Stones.

Stepping Stones Lighthouse has a sister lighthouse, the Hudson-Athens Lighthouse, which has been preserved. The Record spoke with the president of its preservation society,

Carol Gans, who said, “I can’t imagine our landscape without the lighthouse…it’s an important part of our heritage.” Their group welcomes school tours to the lighthouse and family visits sponsored by Hudson Cruises.

Gans feels especially fortunate that one of their active volunteers is Emily Brunner, 88, who tells stories to visitors about growing up in the lighthouse when her father, Emil, was the keeper between the years of 1930 and 1949. Their lighthouse has been the scene for weddings, class reunions and even a bachelor party.

For more information about getting involved on the ground floor of saving a unique piece of history, call the Great Neck Park District at 472-0181.