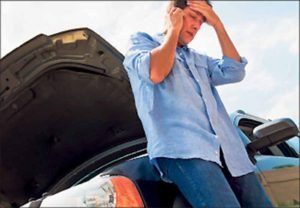 Too many roadside fatalities have occurred across Long Island, which is why it’s imperative to know how to stay safe on the side of the road.

On Thursday, July 21, Mark K. Feldman, a 54 year old from Sands Point driving on the Long Island Expressway (LIE) by exit 39, noticed his vehicle had a flat tire. After pulling over to the right shoulder and exiting his vehicle, he was struck and killed by a United States Postal Service tractor trailer. A similar incident occurred in May when the driver of a disabled vehicle and one of its four passengers, who were standing outside the vehicle, were struck and killed by an SUV in the left lane of the LIE between exits 39 and 40 in Old Westbury.

Both sides are dangerous, especially along roadways such as the Northern and Southern State Parkways, which have sides that aren’t safely set up. Robert Sinclair, manager of media relations for the American Automobile Association (AAA), said that if you find yourself with a flat tire on a highway, “sometimes it’s best to drive on that flat until you can get to an exit and get off that roadway. Be out of the way of high-speed travel.”

If you’re stuck in the middle of the road and can’t move away from traffic, sometimes staying in the car is the best possible option.

“Generally we tell people to get to the side of the road and exit the vehicle. But, if you’re in the middle of the roadway, flesh and bone is no competition for being struck by a vehicle,” said Sinclair. “If you stay in your vehicle that has protection systems, that can help in case you do get struck.”

A few simple precautions, like using four-way flashers, keeping car lights on and raising the hood, if it is safe to do so, can prevent a catastrophic event.

AAA has been taking steps to try and prevent disastrous roadside events. In New York, the group has lobbied for the Move Over Slow Down law, which mandates that everyone who sees a vehicle with flashing lights change lanes to give emergency and roadside assistance vehicles room to work. If traffic conditions prevent you from moving over, then you must slow down significantly.

AAA recently released a study that examined member breakdowns in 2015 and discovered that 32 million were due to flats, dead batteries and lockouts, which highlights the importance of maintenance.

“Giving attention to those maintenance items are very important,” said Sinclair. “Make sure tires are properly inflated. Battery terminals must be cleaned. If your battery is three years old, have it tested. Batteries last three to five years.”

“Make sure your car is in good working order,” said Heilig. “Especially in the heat, tires take a lot of abuse and go flat. Make sure there is enough cooling.”

Prepare for driving emergencies by being mindful of the situations that could occur and have a plan in case something goes wrong.

“Pull off to the right as far as possible and leave the vehicle. Be behind the vehicle by at least 100 feet,” said Sinclair. “If the vehicle is struck, it will be propelled forward and you’ll be out of the path of travel of the flying vehicle.”

According to Heilig, cars get hit on the side of the road about twice a week. He suggested being prepared with a rag or flag, which should be placed on the mirror, alerting other drivers that there’s a stopped vehicle.

“A moving vehicle of any size has a lot of energy and a lot of potential energy. If that vehicle were to strike someone or something, the damage can be catastrophic,” said Sinclair. “It’s very important that people exercise lots of care when they’re broken down by the side of the road. We have 32 million examples of why that’s very important.”