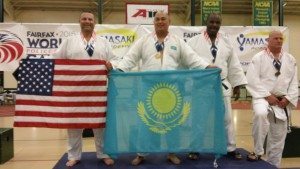 After retiring from the competitive arena almost three years ago to take care of his son Jake who was diagnosed with a rare pediatric cancer, Lake Success Police Lt. Mark Staniszewski returned to competing this past weekend at the 2015 Police and Fire World Games. Staniszewski proudly represented his department in this Olympic-style sporting event, which took place in Fairfax, VA and hosted over 13,000 athletes from 70 different countries.

On Saturday June 27, Staniszewski entered the judo competition in the (+100kg) weight class division. After losing a close first round match to world champion Askar Zhandarov of Kazakhstan, Staniszewski battled back winning his next three matches over John Brobst and Michael Cuyler of the USA and David Alexander of England to capture a world silver medal.

On Sunday, June 28, Staniszewski entered the Submission Grappling event in the heavyweight division and once again faced Askar Zhandarov of Kazakhstan. This time, Staniszewski beat the former Soviet champion and advanced to the finals against 6’6”, 301 pound Brazilian Jiu-Jitsu black belt and power lifter Eric Eads. Although effecting numerous submission attempts on his much larger opponent, Staniszewski lost the match by two points, earning his second silver medal of the weekend.

Lt. Staniszewski is the deputy commanding officer of the Lake Success Police Department and director of the “Team Believe” Judo and Brazilian Jiu-Jitsu programs on Long Island. Team Believe is an inspired martial arts program founded by Staniszewski in loving memory of his magical son Jake.