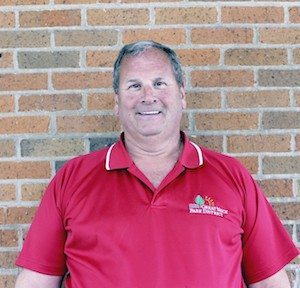 George Amitrano is no ordinary guy. When he first started working for the Park District in July 2013 as recreation supervisor, I thought he was a “nice enough” co-worker. I figured in time, I would see what he had to offer, since I heard he came to Great Neck with lots of recreation experience under his belt. After interviewing him for this article, I realize that is a complete understatement.

George was raised in Valley Stream and at age 15 began working in the Hewlett School District’s department of recreation, where he attended school. He started by assisting in the swimming programs. As a teenager, he also spent four years volunteering at the Association for the Help of Retarded Children (AHRC), taking the kids camping annually. During his college days, he studied hard, participated on the swimming team and worked a side job at Herman’s Sporting Goods. He graduated from CUNY Lehman College with a Bachelor of Science in Recreation Education and took his first job right out of school with the Boy Scouts of America as a district executive in Suffolk County. For a number of years afterward, George worked in the Roller Skating Rink business, both in New York and Philadelphia. He told me some harrowing stories about working in the inner city of Philadelphia which curled my socks. I’ll spare the details but I’m glad George got out of there in one piece.

When the roller skating business began to die out, George found himself married with a baby, out of work and unsure of what to do next. There seemed to be only dead ends in the recreation work he loved. His dad, fortunately, worked for AT&T and set up an interview for George there. This is where he worked in customer service and computer programming for 28 years, to support his wife and three children. All the while, George never stopped coaching swimming in his spare time. When his job was outsourced in 2011, he found himself again, out of work. Going back to his love of recreation, he turned to Civil Service and that is how the Great Neck Park District found him. George is knowledgeable in CPR/First Aid, lifeguard training, water safety instruction and can teach anything concerning health and safety. He has plans to develop the Winter Swim Program, enhance the Parkwood Family Aquatic Center, while working with the lifeguards at these programs and facilities, to improve safety. Plus, he has intentions to increase staff knowledge in the Park District of the Automatic External Defibrillator (AED).

George has been with the Park District for almost two years. He now has three married children and one granddaughter. In 2014, George received the Youth Advocate Award of the Year from the Valley Stream Youth Council for his work with the Boy Scouts, Red Cross, Valley Stream Swim Team/ coaching staff and Hewlett School District swim coaching.