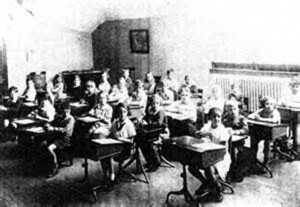 The Great Neck School District’s new video, Great Neck Public Schools: The First 200 Years, is making the rounds of local organizations and municipalities. At the end of last month, Board of Education members treated local officials at the Great Neck Village Officials Association’s latest meeting to one of the first screenings. Explaining the video production and the 200th year anniversary for the school district, longtime school board member Lawrence Gross (current board vice president) spoke about the school district’s “200 years of educational excellence.”

The Great Neck School District first opened its doors in 1812, when New York State first called for public education. Great Neck’s public schools began with 184 students and today the district has grown in many different ways. “Lots of good things go on (in our schools) everyday,” said Gross. “There is a lot to celebrate.”

Not everyone, of course, knows how very much learning and individual person growth is involved in educating each student. But the video captures a lot of this facet of school life, with wonderful stories and the highlights of the classroom and extra-curricular activities.

Gross and Board of Education President Barbara Berkowitz also announced that an official 200 Year school district official celebration will be held on Sunday, April 26, at Great Neck South High School, from 1 to p.m. Included in the celebration will be a recognition of school district past administrators and recognition of outstanding students from each class from the past… a Showcase of Excellence.

A gasp of amazement, and joyful, proud words accompanied Gross’ announcement that the 200-year celebratory video was produced by the school district’s student run television studio, possibly the first such studio in the country.

“Looking at this video, you know why we are so proud,” said Berkwitz.

Screenings of the video, packed with history and wonderful old photos, as well as current news, are also scheduled for other organizations all around town.