The William A. Shine–Great Neck South High School students are planning to participate in the #Enough National Walkout on Wednesday, March 14, at 10 a.m. 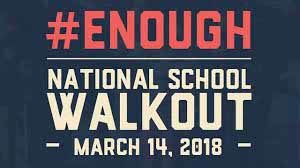 The nationwide protest is both a memorial and protest action. Students across the United States will walk out of their schools and universities for 17 minutes to honor the lives of the 17 people killed at Marjory Stoneman Douglas High School in Parkland, FL, and to press lawmakers to pass stricter gun control laws.

Students at Great Neck South High School will read the names of the 17 students and teachers who were shot and killed one month earlier by an emotionally troubled 19 year old with an AR-15 rifle. They will also discuss the actions that students can take to demand that elected officials do the job they were elected to do—keep students safe. The students will then march around the mall in front of the school to let lawmakers know that they must take meaningful action to pass federal gun reform legislation that will save the lives of students and teachers.