While some college students are spending spring break sunning themselves on a beach in the Caribbean, the Dear Abbeys, Boston University’s all-male a cappella group, led by 2014 Great Neck South High graduate Todd Reiss, will spend March 3 to 9 performing in the tristate area, and will be based in Great Neck.

“Ten of us will be traveling to the Great Neck area during our East Coast tour, and we could not be more excited,” said the group’s music director. “We will be performing at Great Neck House on Tuesday, March 6, at 7:30 p.m. We would love to perform elsewhere in Great Neck, especially at one of the local hospitals or senior living centers, and the group plans to go to New York City, New Jersey and Connecticut to perform at as many venues as we can.”

Reiss’s interest in music began at South Middle School, but he didn’t begin performing a cappella, or singing without instrumental accompaniment, until much later.

“I got involved kind of late in the choir/a cappella scene,” explained Reiss. “I had a rock band going with some friends in middle school, wanted to keep music in my life in high school and sing more so I joined choir, and that trend continued in college when I joined a cappella.”

The singer was drawn to the music club early in college and was determined to play an integral role in the group’s success.

“BU [Boston University] has a ton of student organizations, but I was so enamored with how active and friendly the a cappella groups were at the club fair, SPLASH, that I decided to try out,” Reiss reminisced. “I tried out for many groups, but I was infatuated—and later fell in love—with the Dear Abbeys, the only all-male group on campus.”

“I grew up listening to a lot of my friends playing string instruments, and always gravitated towards cello—as opposed to the violin that many of my friends played,” explained Reiss. “I love the deep, rich sound produced by the cello and I guess that affinity translated to my a cappella preferences as well, not to mention the comradery and brotherhood that was so palpable in the Abbeys and drew me in. I knew from the moment I joined that I wanted to grow in that group and make it a cornerstone in my college experience. I decided very early on that I wanted to one day lead it and be the music director. My first year, I told the music director that I wanted his spot, and while he gasped and scoffed initially, he and the music directors after him worked with me to ensure that I would one day be ready to take on the challenge—and boy is it a challenge.” 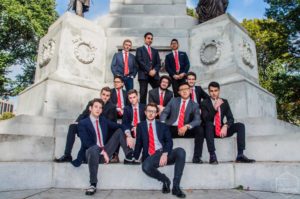 “There was always a teacher or choir director looming over us and making sure we were meeting goals and sounding good in high school,” noted Reiss. “In college, it is completely self-run. The starkest and most wonderful difference between the two is that in college, you not only figure out yourself and discover your true passions, but you learn to work with peers and lead one another while creating lifelong friends. While at times it is hard to strike a balance between friend and leader, I have loved growing into myself and being able to absorb so much knowledge and maturity from those who once led me, and now passing that down to future generations.”

Being in the group has offered many life lessons.

“We not only teach each other music and sing together, but we teach each other how to lead, grow and mature into music directors, marketing directors, treasurers and business managers,” said Reiss. “We have gotten opportunities to travel around the country and the world and perform for all types of audiences, from sold-out arenas with celebrities and fashion shows to hospitals and senior centers, we have learned so much from each performance and have been so blessed with opportunities.”

This tightly knit group provides each member an opportunity to showcase his unique talents.

“All of our arrangements—adaptations of songs into a cappella format—and choreography are done in-house,” explained Reiss. “We absolutely play to the strengths of the group, as we’ve had some crazy talent to take advantage of. Whenever we get an outstanding beat boxer or very high tenor or even someone who can make a silly noise like a water drop, we make a point of including it. A collegiate group is like a revolving door of talent and weirdness, and so we’ve got to take advantage of what we get while we have it.”

Balancing schoolwork with extensive rehearsals is a challenge that Reiss has had to master.

“It’s always been a struggle,” noted Reiss. “I think that I would’ve performed a whole lot better in classes if I wasn’t spending so much time in this group, though I take solace knowing that this group has taught me more than any class could ever hope to. I have learned how to manage my time, produce shows and albums, lead, inspire and motivate peers—and I had a great deal of fun while doing all of it.”

Between school and the Dear Abbeys, Reiss does manage to find some time for other interests.

“It certainly is tough to find free time, but I do love to draw and make music of my own,” said Reiss. “I have always loved Japanese art and culture, so whenever I can watch, read, write and illustrate stories of Japanese artists and of my own, I cherish any free time I get to spend doing that. Being in Boston certainly has its benefits, too. I love visiting the Museum of Fine Arts or the Isabella Stewart Gardner Museum or just poking around downtown.”

After graduation in a few months, the singer’s life will change dramatically. The senior in the Questrom School of Business at BU, majoring in business administration and concentrating in marketing, is currently also taking a Japanese language course.

“My dream is to travel to Japan and (hopefully) live there for some time after graduating,” noted Reiss. “There are a lot of great teaching exchange and research programs that I am interested in there and I look forward to going. After that, I will, hopefully, work in marketing—fingers crossed—in some big city, be it New York, Boston or Tokyo.”

Recent movies and TV shows have brought a cappella into the mainstream, but often films only portray the glamour, not the reality.

“Pitch Perfect has definitely helped make a cappella more popular, and has also changed it but, if you’re just starting out, don’t expect it to be as easy as they make it seem,” explained Reiss. “It is a really tough craft and takes a lot of rehearsal and dedication to perfect. That being said, it was life changing joining this group, letting it take me through my college experience—and meeting the people who founded the group back in 1992 and interacting with them. It is so meaningful to them that the group has carried on for so many years, and so it means a lot more to me that I get to keep passing that on. I’m a little nervous to let it go, really, and leave it to my Padawans, but such is the fate of every Dear Abbey at some point.”

Reiss can’t wait to return to the peninsula to show the community what he has learned.

“We are very excited to come to Great Neck and show the town what we have been working so hard on,” noted Reiss.

Listen to the Dear Abbeys at www.dearabbeys.com and view videos on YouTube, including the latest full-length studio album, Songs for Mary Todd, which was just nominated for a CARA award, and a new music video of Justin Timberlake’s “Amnesia.”