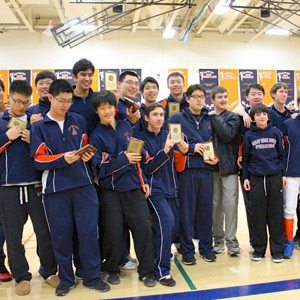 The two coaches point with pride to their school’s seven Nassau titles in the past nine years and the teams’ additional successes during the just-completed season.

The Rebels defeated Oyster Bay, 14-12, earlier in the month to win the boys’ county title. The Oyster Bay match was the fifth year in a row that the two teams met in the Nassau final. Great Neck has won three of the meetings.

Although the team lost to Ward Melville in the Island-wide final, they delivered strong performances at every level. Proud of the students’ efforts, the coaches made sure to also credit adults’ contributions.

“The unsung heroes of our fencing teams are the parents,” says Baravarian, who has now led the Rebels to two straight Nassau County championships in four years of coaching. The boys won four straight titles from 2006 through 2010 and the girls won in 2011.

“They’ve dedicated themselves to excellence,” Sagevick added, in regard to the parent component. “It’s a continuation of hard work,” referring to how the parents have helped team members develop both athletically and academically.”

“The parents get behind the kids,” continued Baravarian. “They take them all over the country to fence in national tournaments. The parents help us so much because they see how disciplined fencing makes the kids. They see what it can do for their kids as far as confidence, focus and how to deal with adversity.”

For Sagevick, who fenced during high school in Garden City’s very strong program, and later in college for Sacred Heart in Connecticut, this was her first year coaching at Great Neck. Her team’s loss in the semi-final Nassau competition to Garden City was disappointing but a step forward for the program. Great Neck had beaten the eventual Nassau winner earlier in the season.

She gives a lot of credit to Baravarian for the current state of the program.

“Coming into the program that Josh had started, I had a lot of ideas about what I wanted to do,” she said. “But I came in and found out it was a very strong program already and there was very little for me to do. Josh is a very talented coach. He knows all about cardio and building strength and endurance.”

“We both share responsibilities,” said Baravarian, who, in turn, gave his colleague credit for strengthening the program. “We’ve always set it up this way.” He also praised his volunteer coach, Tyler Healy, a graduate of the school. “He did a great job with the kids.”

Skyler Chin, a junior, continued to excel this year for Baravarian. “He’s reliable and calm and cool under pressure,” the coach said. Chin’s career record is now 74-4 and he was the gold medalist (epee) in the county individuals and was named to the All-Long Island team for the second year in a row.

His teammate senior Alex Hall was the runner-up to Chin in the individuals. Junior Kody Horiuchi was the gold medalist in the foil and was also named to the All-County team while Andy Shu, another senior, went 17-1 for the season and was selected for the All-Long Island team.

Sophomore Vera Lin (28-1) won the county championship (epee) and achieved All-County and All-Long Island honors. Teammate Kelly Gragossian, another sophomore, was also named to both of those teams. Macy Meng (26-5), only a freshman, was selected for the All-County team.

Both coaches are optimistic about continuing success next season and beyond.

“We always have good young kids coming up,” said Baravarian, even though six of his nine starters are graduating.

“We were so close this year,” added Sagevick, who said she saw a lot of promising talent during a recent underclassmen tournament. “And Vera and Kelly are so helpful,” she continued. ”They take a lot of girls under their wing and teach them.”

“The school is so supportive of our teams, too,” Baravarian said. “It’s one of the most successful programs that we have and the administration is very proud of them, from our athletic director to our principal to the superintendent.” 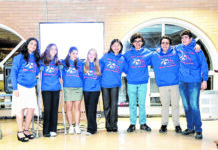