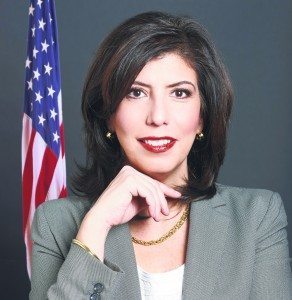 It was one of the most closely watched races in Nassau County but in the end, Acting District Attorney Madeline Singas dominated Republican challenger Kate Murray in the highly contested battle for district attorney.

Though polls showed the candidates were neck and neck in the days leading up to Election Day, when Nov. 3 came, Democratic nominee Singas had a steady lead throughout the night, garnering close to 58 percent of the vote with Murray taking in 42 percent.

Throughout the campaign, Singas touted her experience, emphasizing that the district attorney position needed to be filled by a “prosecutor, not a politician.” Singas, who had served as the acting district attorney since January and has more than 20 years of experience under her belt, said she is committed to not letting party politics get in the way of solutions.

“I was not running as a Democrat or a Republican. I was running as a prosecutor. And that is how I intend to run this office, as a prosecutor,” Singas said in her victory speech at the Garden City Hotel. “I will work with anyone, Republican or Democrat, to find solutions to the problems facing Nassau County. I will run this office without fear or favor. I will be the independent prosecutor Nassau deserves, because that’s what the people who voted for me expect of me, and it’s what I expect of myself.”

Murray, a well-known name throughout the county and the Town of Hempstead supervisor, ran a campaign that touted her qualifications as an administrator. Though she had many big-name endorsements, including the Nassau County PBA and former New York City Mayor Rudy Giuliani, many questioned whether a career politician would be able to do the job of district attorney, which would include tackling corruption.

In her concession speech at Nassau Republican headquarters in Westbury, Murray thanked her supporters and said she was proud of her campaign.

Murray, who surrendered her supervisor seat for the possible DA position, will be replaced by newly elected Republican Anthony Santino.