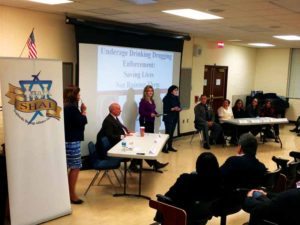 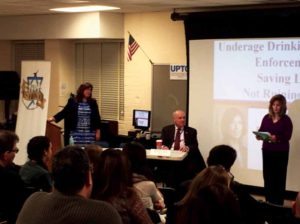 McCormick presented a PowerPoint on the topic, adding information on vehicular crimes related to teen alcohol and drug consumption. She encouraged participation by the high schoolers in attendance, who clearly had been educated in the area of drug and alcohol use/abuse in their health class.

Kaplan enriched the presentation by offering these pointers:

• It is a myth that providing alcohol to teens at home decreases the risk for subsequent drinking problems later in life, though the ceremonial sip of wine on Friday night is not seen as a problem. Studies have shown that the longer teens wait to drink, the more beneficial it is to their lives. The rational part of a teen’s brain is not fully developed and won’t be until he or she turns about 25 years old. Adult and teen brains work differently. Adults think with the prefrontal cortex, the brain’s rational part, whereas teens think with the amygdala, the emotional part. This is why teens are often emotional, and may make poor judgments unless they fully think through what they’re doing. Basically, alcohol and teens don’t make a good match. Parents should be cautious and discourage their teens from consuming alcohol at bar/bat mitzvahs.

• There are resilience factors that we can enforce during the tumultuous teen years. These include, but are not limited to, family dinners and family vacations and, in general, spending quality time with our kids. Family activities build bonds where kids have fun and are exposed to their parents’ values.

• In general, teens will experiment, whether we like it or not. That does not mean we have to encourage their bad behaviors. As parents, we need to encourage our children’s positive behaviors, such as their involvement with school clubs, music, athletics and other positive endeavors. When involved with these positive things, kids will be less likely to, and have less time to, get involved with negative activities. We need to provide a clear message.

• It is OK to say, “No, you can’t go to Susie’s party because there will be no parental supervision.” Kaplan encouraged parents to pick up the phone and talk with the parents of their kids’ friends and find out if they will be present at their children’s upcoming gathering. 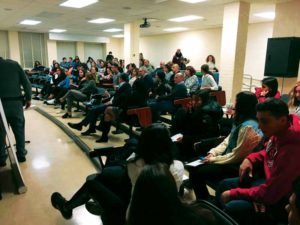 • Our children need limits and boundaries and they need to know what we expect of them. They want to please us and if we expect them not to drink, they are much more likely not to drink.

• Some teens and adults have a drink before a social gathering in order to lose their inhibitions and be able to socialize more readily. Many children refer to this as “pre-gaming.” The long-term effect is increased tolerance to the alcohol and needing more and more of it in order to get the desired effect, which can affect the person’s personality and may lead to depression.

Details of the Social Host Law, which can be found at www.nassaucountyny.gov/2014/social-host-law, aims to curtail underage drinking in private homes where adults knowingly allow minors to consume alcohol. The law applies to any adult, including a parent, who is older than 18 and knowingly allows drinking of alcohol by any person younger than age 21. Anyone older than age 18
who owns, rents or controls a private home and knowingly allows the use of alcohol by any minor on the premises and fails to take corrective action upon learning of the consumption of alcohol may be charged. Corrective action may include, but is not limited to, demanding the minor to stop drinking or leave the premises.

Underage drinking can be reported anonymously by calling 866-UNDER-21. Other valuable resources include Partnership for Drug-Free Kids, www.drugfree.org, and MADD (Mothers Against Drunk Drivers), www.madd.org.