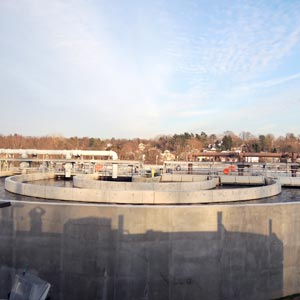 The sewer connection between the Great Neck Water Pollution Control District and the Village of Great Neck’s now-defunct sewer plant was finally completed and up and running last Monday night, Dec. 9. The combination was the result of New York State’s Department of Conservation mandate that both sewer plants must reduce nitrogen levels; the village joining the GNWPCD was the most economical solution. GNWPCD Superintendent Chris Murphy said that after the combination, the district’s nitrogen counts are below those mandated by the DEC. He also told the Great Neck Record that there was no “back-up,” no problems at all with treating the sewage once the village’s plant combined with the district plant.

Any Village of Great Neck sewer plant employees working for the village when the contract was signed, have been offered employment at the district’s sewer plant.

The GNWPCD floated a $60 million dollar bond to complete this sewer plant upgrade and combination. When the project turned out to cost less than anticipated, the extra funds were used to make further improvement to the new plant, according to Murphy and commissioners Jerry Landsberg, Deena Lesser and Steve Reiter.

Back at the very beginning, early in the “new century,” when the DEC mandate was issued, at first there was a movement to divert the Village of Great Neck sewage to a Nassau County sewage treatment plant on the South Shore. That proposal, though strongly endorsed by some public officials, met with such strong opposition that in 2008 then-Town of North Hempstead Supervisor Jon Kaiman helped the Village of Great Neck and forced the GNWPCD to seriously consider the combination, putting together an advisory committee of the Great Neck mayors to supervise the plan for combination. The mayors of all of the villages with residents in the GNWPCD became part of this committee as soon as issues arose and delays were encountered.

In 2009, at the very end of the year, an IMA (inter-municipal agreement) was signed by the village and the GNWPCD. Construction did not start until January 2010. When the plant itself was finished, and work on pipe connections began, public complaints came in, objecting to the temporary new lanes of traffic and the work crews and equipment blocking East Shore Road and causing great traffic delays at all hour. At press time, Murphy promised that all of the roadwork and accompanying equipment would soon be gone.

One further issue, though, did arise during the interview with the GNWPCD superintendent and commissioners, the possibility of an apartment complex built just north of the sewer plant. At this time, the Village of Great Neck is considering a 191-unit luxury apartment building to be built by Avalon Bay. Avalon Bay builds such complexes through-out the country and is well-experienced in cleaning up polluted property such as this site, where old, unused oil tanks now stand. Currently, Avalon Bay is in the process of appearing at village hearings, hoping to help bring about zoning changes that would allow the building. However, there is concern at the sewage treatment plant. Although those at the GNWPCD have consistently maintained that there has not been, and will not be any odors emanating from their plant, there are still concerns that should the complex be built, there could be complaints from the buildings’ residents. The only way to eliminate such odors is by constructing a $10 million cover. Such a cover would come from taxpayer money.

Reiter told the Record: “Great Neck now has the most state-of-the-art sewage treatment plan on the Eastern Seaboard.”